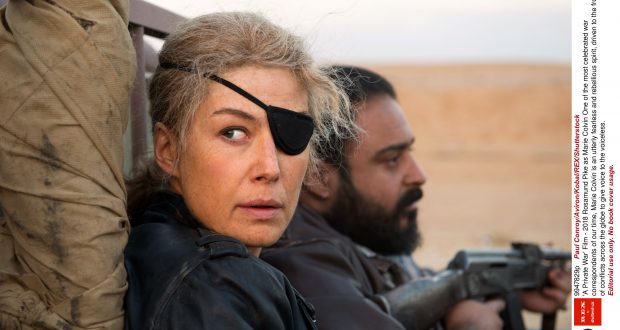 Rosamund Pike as Marie Colvin 'A Private War' Film - 2018 One of the most celebrated war correspondents of our time, Marie Colvin is an utterly fearless and rebellious spirit, driven to the frontline of conflicts across the globe to give voice to the voiceless.

Written by Evie Rusman on February 6 2019

A Private War, based on the life and career of The Sunday Times war correspondent Marie Colvin, pays homage to journalism and is a tribute to those who sacrifice their lives for the job every day.

A Private War makes for an intense and compelling watch that the cruelty of war and particularly the psychological impacts it has on those reporting it.

The film begins in 2012, amongst the war-strewn city of Homs In Syria, the place Colvin eventually meets her death. Only last week was it confirmed that the award-winning journalist was murdered by Syrian soldiers in an attack against the media.

However, we are quickly transported back in time to an earlier moment in Colvin’s career, where her courageous and arguably reckless attitude to reporting almost gets her killed when covering the Tamil Tigers in Sri Lanka, and results in her losing the sight in her left eye. From then on Colvin (Played by Rosamund Pike) sports a pirate eye patch.

A Private War continually jumps from war zone to war zone and is intertwined with snippets of Colvin’s lavish life in London, which is highly effective but makes for an uneasy watch for the viewer. This chaotic structure hints to the dangers and unpredictability of war reporting.

Rosamund Pike’s portrayal of Colvin is brilliant. Different from roles such as Jane Bennet in Pride & Prejudice, the actor somehow manages to combine Colvin’s grittiness with real-time vulnerability to create an emotionally complex character, who suffers from PTSD.

Jamie Dornan is Pike’s counterpart, playing Liverpudlian photojournalist Paul Conroy, who survived the attack on Homs in 2012. Dornan brings a sense of humour to the role, which makes for witty moments between him and Pike and brings light to a deeply distressing subject matter.

During filming, Conroy oversaw the acting and gave Pike and Dornan advice on how to tackle these difficult and intricate roles.

In a private Q&A, Pike said: “I don’t think Marie is like anyone I have played before or will play again. I challenge any fictitious writer to create a character who is as interesting and riveting as Marie Colvin.”

In one scene, we see Colvin in her London flat struggling with the mental impact of war and thus, she turns to alcohol, which eventually gets her admitted into rehab.

This is where we see her at her most vulnerable, which makes for a quiet moment between her and Conroy as she reveals her deepest inner thoughts. The simplicity of this scene is what makes it ever more tormenting.

During the film, we see Colvin’s stints in Iraq, Afghanistan and Libya, before finally being transported back to Homs where, as an audience, we are left feeling angry at her actions and questioning what was going on in her mind.

Director, Matthew Heineman, focuses largely on bringing honour to journalism and inspires us to look at reporting in a positive light. He fights to show us the lengths reporters, like Marie Colvin, will go to in order to seek the truth and tell vulnerable people’s stories, and in many ways, he succeeds.

He shows us the horrors of war at a time when, as a generation, war is far from our minds, and makes us question ourselves for not giving everything we have to get to the truth, leaving us with a necessary feeling of guilt.

All in all, Heineman’s film boasts of Colvin’s accomplishments and emphasises the enormous courage it took her to do what she did. Therefore, I would say it is a triumph for journalism as it succeeds in its mission to create empathy – not only for Colvin but for the outstanding risk journalists like her put themselves in every day to get to the facts.

A Private War is released in cinemas across the UK on February 15.