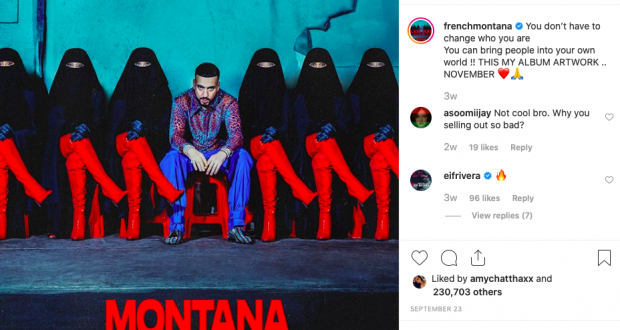 Will Rappers Go To Any Extent To Stay Relevant?

Muslim students of Kingston were outraged by the recently uploaded music of UK Rapper, Krept and American Rapper, French Montana after offending many of the Muslim faith as they used scriptures of the Holy Quran in their music.

Muslim students of Kingston were outraged by the recently uploaded music of UK Rapper, Krept and American Rapper, French Montana after offending many of the Muslim faith as they used scriptures of the Holy Quran in their music.

The song angered many as the song was based upon drugs and fornication – both forbidden concepts in Islam.

During the song, Krept notably used Quranic quotations which translates to “In the name of Allah, the Most Gracious, the Most Merciful”.

Samiah Akram, a student at KU said: “I feel like this was inappropriate because he is Muslim so he should understand the meaning of the word and use it in the correct context”.

Identifying himself as Muslim, many fans were disappointed with his level of disrespect with one tweeting: “Nahhh man Krept dragged it. Reading verses of the holy book on a track? Really? No morals.”

Young Adz went on to Instagram Live to discuss his latest album (PTSD) and addressed the backlash the artist has received which had been circulating the internet.

He went on to defend the artists by saying that many rappers like himself for years have been using Islamic references in their music. A prime example he mentioned: “Krept and Konan Link Up TV freestyle- straight up Islamic”.

He continued on to say: “What the f*** are you talking about bro? If you are on your deen (religion) how do you even know who am I ?… Five, six, seven years ago your favourite rappers were doing up ‘Islamic rap’… [It] was the biggest thing in UK underground music.”

However, this is not the first time an artist from the music industry has caused a lot of controversies. Over the Atlantic, US rapper French Montana also used the Islamic religion to promote his music.

French Montana, a Moroccan-born Muslim also known as Karim Kharbouch, recently uploaded the artwork for his upcoming album this November.

The upload presented Muslim women who were all wearing the full Islamic veil (niqab) in a very provocative manner- contradicting the purpose of the observation.

KU student of business management told the River what she thought: “The way he has portrayed women in the niqab alongside his [French Montana] music it is very disrespectful as many things he talks which are all sinful.”

The women in the photo were dressed in clad whilst wearing red leather boots which many Muslims found very offensive as the content was seen as contradictory and seductive.

Another user of Twitter went on the social media platform to express her opinion in which she said: “These rappers have crossed every line, French Montana sexualizing the NIQAB, Krept and Konan using the opening of the Quran in their filthy song”.

The artist has not addressed the situation.