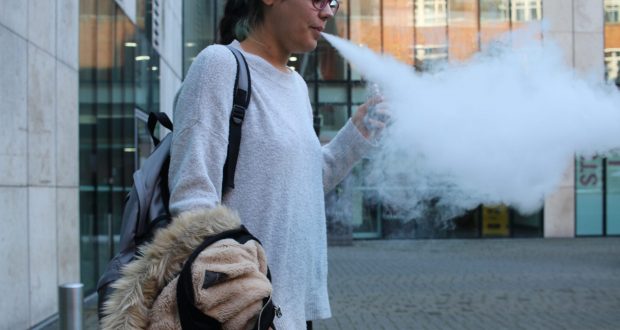 Student vaping in the courtyard photo by: Emily Hooper

Vaping: Is it safer than smoking?

Vaping is an increasingly popular way to help quit smoking but recent research shows that mice exposed to nicotine vapour from e-cigarettes developed lung cancer within a year.

Published in Proceedings of National Academy of Sciences (PNAS), this study adds to a collection of research highlighting the detrimental effects of vaping.

Third-year psychology student Ella Cannadine, an ex-smoker, said she feels sceptical about vaping after reports of deaths came about which prompted her to quit vaping.

“I vaped for about a year but recent media coverage linking it to deaths made me realise it’s not as safe as I originally thought,” she said.

Another factor that caused Cannadine to quit was when a friend from America fell ill, suspected to be from vaping.

She said: “It was quite scary as the vapes in America are definitely stronger. It was like smoking a cigarette.”

Donald Trump has called for a ban on vaping after 33 people died in the US and some states have already implemented the ban.

Josh Crow, a second-year mechanical engineering student, said that the ban in America was both good and bad as vaping was “better than smoking but it’s still not healthy.”

In Kingston alone, there are six vape shops, including Evapo, which offers ten per cent student discount, and are still popular despite the controversy around vaping.

A spokesperson for Evapo said: “There has been a significant decrease in smoking rates in recent years, and they are now at an all-time low in the UK.”

She said that research suggested that vaping has played at least some part in this decrease.

Chief executive at Action on Smoking and Health (ASH) Deborah Arnott believes the news of deaths could drive vapers back to smoking.

“Vapers should not be scared back into smoking by the news of vaping illnesses in the US,” she reported on the ASH website.

Arnott stressed the importance of buying vapes that are certified in the UK and not “illicit unregulated products over the internet.”

She said: “Despite the recent news I still believe it must be better than smoking.”