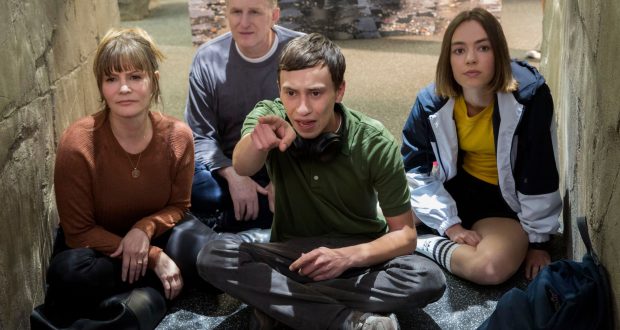 Written by Sophie Humphrey on November 8 2019

Atypical has always been a criminally underrated show, but season three has shown that this show is one of the great Netflix originals.

Atypical was a show I heard about accidentally, seeing the trailer for season one posted on YouTube a year ago. By this time, season two had just come out, so I conducted my binge and fell in love with the Gardeners.

The show follows Sam Gardener, a teenager on the autism spectrum navigating his way through the challenges of life: high school, friends, work, family life and romantic relationships.

Additionally, we see his sister Casey grow into a competitive runner for her track team and get a scholarship to elite prep school, Clayton, which is known for its athletics programme.

Both seasons one and two were addicting, so it was only natural that I waited patiently for season 3, and naturally watched it all in a day.

There will be spoilers ahead, so fasten your seatbelts.

Season three opens where season two left of, with Sam preparing for college, his parents dealing with issues of infidelity and his sister dealing with questioning her sexuality. I’ll start by saying I love the pace of this season because each episode transitioned smoothly into the next. We didn’t have to wait long to see the characters arcs of the season, which some shows tend to drag out.

This season was on par with season two, with the build-up of emotional moments combined with the series familiar cynical comedy, which adds a humorous element to the otherwise touchy subject matter that is covered.

Now, onto my favourite moments in season three.

The relationship between Casey (Brigette Lundy Paine) and Izzy (Fivel Stewart) was portrayed beautifully this season. The slow-burn romance adds realism to their relationship which I appreciate, as the show acknowledged the outside factors that affect the pacing of their relationship such as Casey’s boyfriend Evan, Izzy’s reluctance to move forward in their relationship and of course accepting one’s sexuality. Along the way, there are bumps in the road, but the writers address these issues and don’t leave any loose threads concerning their relationship status. The two end the season as a couple after some inevitable angst and some epic kisses that’ll warm any hearts.

Sam is always fantastic, but Keir GilChrist’s performance this season is a perfect mixture of the old and new Sam. By this I mean, we still see the same nervous Sam Gardener who loves his schedules and his penguins, but with more confidence.

This is portrayed as Sam tells his girlfriend, Paige, he loves her when she needs reassurance about her life decision to drop out of college and the way he reconciles with best friend Zahid, who he begins to fight with over a discrepancy at their workplace, Techtropolis.

Perhaps the best part of Sam’s characterisation, however, is the way he learns to tackle the challenges of college and his assignments, realising that he can do it, just as his family has always told him.

It is nice the writers highlighted this, as in episode one they showcased Sam’s obsession with the fact that ‘four out of five students on the spectrum don’t graduate college in five years’.

At the season’s climax, high-functioning Sam is taken into full-swing as he has settled into student life whilst balancing his personal life, opening society’s eyes to the fact that those on the spectrum can beat the odds against them, as Sam seems to be doing.

The real love story of season three, though, is Sam and Zahid’s friendship. Zahid (Nik Dodani) may be loveably annoying, but his friendship with Sam is one of the purest and has been for the show’s running. For example, Zahid convinces Sam to attend a party, which ironically sucks for him, until he meets future girlfriend, Gretchen. Their best scenes, however, are when both are fighting and we see the emotional absences that are left by their friendship being damaged. In one particular scene, Casey’s voice narrates over Sam, and the line “it’s like he’s always there’ is spoken. This technique adds to Sam’s pain and reiterates the fact that both Casey and Sam are missing significant people in their life, both having gone through break-ups of friendships, and relationships.

The best scenes come in episode nine, when the writers finally give us the long-awaited reconciliation and then in episode 10, Sam joins Zahid in a hilarious scene where they both find some comfort in being hit by balls shot out of a machine. (Yeah, I don’t understand it either.)

All jokes aside, the duo is a perfect balance between sweet and stupid, which helps to keep the lightness of the show. As the season ends, it’s evident both men have matured and are preparing for their next relationship step: roommates.

As I did love this season, I do have to acknowledge creator Robia Rashid and the writers captured the show’s charm once again in season three, but I do have a few gripes about a few things.

One of season two’s main plotlines was the infidelity in the Gardener parent’s relationship as Elsa cheats on husband Doug with a bartender. The storyline was well-done, other than the fact that this plotline was dragged through the mud in season three. We see Elsa (Jennifer Jason Leigh) trying to repair her relationship with Doug (Michael Rapaport) which can only be compared to a seesaw swinging up and then straight back down again. Sure, this is true to how some relationships are, but in this show it just gets exhausting.

Other than a few nice conversations, the characters do not break ground on repairing their relationship. Elsa’s suggestion for them to separate was the most plausible aspect of this plotline, as their reunion at the end of episode ten seems to defeat the purpose of their struggle in the first place!

Also, not to mention the fact that husband Doug seems to have trouble understandably trusting his wife again, but then proceeds to go on a work trip with a friend, Megan. He reunites with Elsa, deciding to stay together, whilst neglecting to mention that Megan kissed him on the trip.

This is not only frustrating but out of character, as considering the fact he was cheated on, you think he’d have a much bigger problem with cheating than allowing himself to be complicit in it.

your first look at Atypical s3, which returns 1 november! 🐧 pic.twitter.com/Oroso5w7VA

Zahid is always entertaining, albeit a bit of an idiot. But the character of Gretchen is insufferable. The addition added nothing to the show, and Gretchen was only a minor character used to fuel conflict between Zahid and Sam. I think by this point, the writers were running out of ideas on how to spice up the season. Zahid always existed as Sam’s best friend, so using his character more seemed like a good choice, but doing this by giving him a random filler girlfriend was not the right way to do it. Aside from that, the character is exaggerated and unnecessary for the development of the series, only used as the catalyst to Sam and Zahid’s fight when she steals a FitBit from their workplace. (Yes, this was an actual plot that was approved in the writer’s room.)

In my opinion, season three overall is a must-watch. The style of the show is consistent and the majority of plotlines are fleshed out to a satisfying degree. Additionally, recurring roles should be credited as some of the makers as this season, as Izzy and Zahid added more magic this season which season two slightly lacked.

If you need a new show to binge, all three seasons of Atypical are now streaming on Netflix.