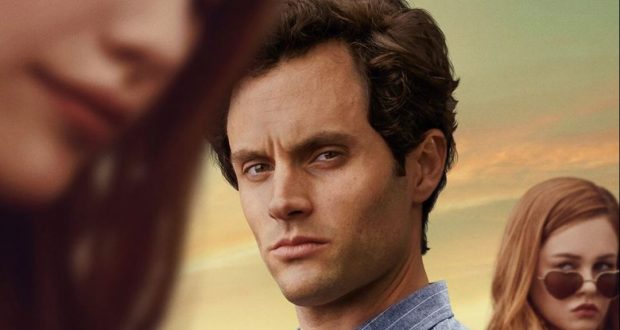 Netflix’s You Season 2 is the perfect mixture of death, deception and darkness

Written by Sophie Humphrey on December 26 2019

Our favourite resident psycho Joe Goldberg (Penn Badgley) is back in the new setting of LA under the moniker, Will Bettelheim, just in time for our Boxing Day binge in You season two.

He finds himself infatuated with another wholesome everygirl, Love Quinn (Victoria Pedretti), amidst the chaos of trying to escape his back-from-the-dead ex Candance, (Ambyr Childers) who threatens to expose his past, and his murdering of recent ex, Guinevere Beck (Elizabeth Lail).

The new female cast is essential to the success of season twos’ somewhat outlandish plot, as the little details we learn along the way would be something you’d think were from a script for some elaborate telenovela, but are made believable the female cast.

Pedretti makes Love a compelling and complex character, whose personal damage makes her one of the series’ most flawed people and far from the idealised version of herself that Joe conjures up when he meets her while working at her parent’s store Anavrin (cleverly spelling Nirvana backwards).

Along with the introduction of Love, comes two other females: Delilah Alves(Carmela Zumbado), an investigative journalist and Joe’s neighbour, and her younger sister, Ellie (Jenna Ortega), an aspiring filmmaker.

The subplots surrounding Ellie and Delilah are thoroughly enjoyable, and Delilah and Joe’s dynamic was very satisfying to me, even if by the season’s close, the relationships he forms with the sisters don’t go in the direction that I’d hoped.

But that’s why season 2 is so addictive. We and the other characters want to believe that Joe is good. Using Ellie to show his human side makes us root for him because, in a similar twisted way, his violent and obsessive behaviour proves useful to protect Ellie, as it did in season one for his young neighbour, Paco from his mother’s abusive boyfriend.

Delilah, however much we love her, proves to be overcome with her own journalistic and personal struggles, but still provides some much-needed wit and spunk in season two.

The most significant difference in season two from season one is that Joe meets his maker in Candance. The cat and mouse game that the writers play is excellent, as I was left continuously on the edge of my seat wondering if and when Joe would be exposed for his earlier crimes.

Despite this, I am disappointed by how Candance’s plot seemed to drift in the last three episodes. I felt like the writers were finding a way to write her out of the show. In the end though, she doesn’t prove to be a threat to Joe at all, and her appearances throughout the season are therefore deemed as anti-climatic.

Her biggest achievement seems to be in the season’s climax as she gets Joe to temporarily acknowledge that he is a monster, but other than that, she is thoroughly underwhelming.

Another gripe I have with season two’s characters is with Love’s brother, Forty Quinn, who’s narrative is insufferable as his personality trait is that he is a failed scriptwriter bringing Joe into his mess of addiction and quest to be famous.

I do think, however, that the writers deliberately made him obnoxious because they consistently make fun of those “Angelenos”, and he is one of them.

Joe mocking these stereotypes (the La douche-bro, the wellness freaks, the wannabe social media influencers) were thoroughly enjoyable, and will have you clicking your fingers saying, “Oh, I know someone like that”.

Once again, creators Greg Berlanti and Sera Gamble have managed to provide a deliciously addictive season of romance, violence and plot twists with an incredible performance from Badgley, whose versatile acting abilities allow the character of Joe to continue his pattern of toxic actions and behaviour without us getting bored.