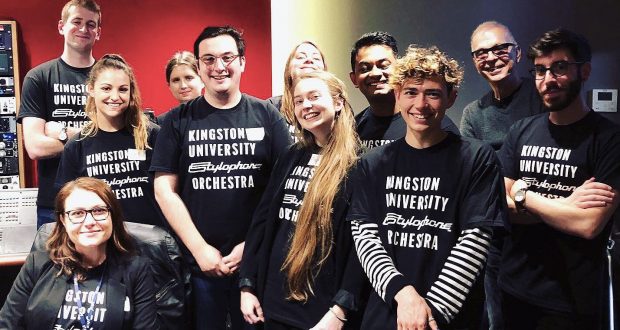 Written by Steph Spyro on January 9 2020

The KU stylophone orchestra’s cover of David Bowie’s hit ‘Space Oddity’ has been viewed by more than 62,000 people online.

The student-made video, posted on Bowie’s official Facebook page, showed the orchestra performing with the song’s original producer Tony Visconti at the University’s Visconti studio at Kingston Hill to mark the song’s 50th anniversary since its release.

The orchestra, thought to be the first ensemble of its kind in the world, used the analogue synthesising instrument from the 1960s to create an unusual cover of the classic song.

Iconic producer Visconti, 75, said: “This version is a bit like Alice in Wonderland falling down the rabbit hole and going to the land of stylophone, where the creatures have a pen with a wire attached.”

Space Oddity was a natural choice for the ensemble, according to die-hard Bowie fan Leah Kardos who started the group in January 2019.

The KU music academic said: “The stylophone as an instrument [was] popularised by Bowie’s song [after] being a hit in 1969. Before that, not many people knew about them, so the track is important for the history of the stylophone and therefore us.”

Talking about the return to the studio named in his honour, Visconti called the recording session “complex”.

He said: “If one person made even the slightest mistake we had to punch in again and, with nine people playing at the same time, you never quite knew what was going to happen.”

But the producer spoke about the joys of working with young students and staff in the group.

He said: “In a professional studio there’s one assistant in the room, whereas here I have 10 or 12 assistants all eager to help. I break all the rules, and they love that because we have a shared spirit.”

The orchestra will be featured on the producer’s next album which will be released later this year.