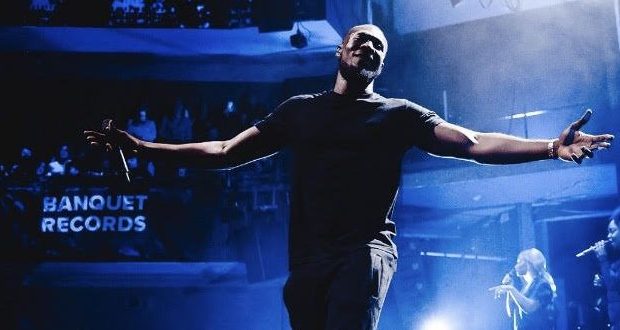 Written by Megan Robinson on January 21 2020

UK grime sensation Stormzy said he was thankful to the hundreds of fans who packed into the Rose Theatre on Monday to hear him play before his world tour.

The 26-year-old was set to do just one show on January 20 but had to add three additional shows due to phenomenal demand.

He told The River: “It’s my last chance to do intimate shows until after the O2. I’ll be doing arenas, so this will be the last time I can do a small room.

“I enjoy that more… it’s nice, it’s in the room and everyone there is a proper fan, do you know what I mean?”

The rapper sold out four intimate gigs, 600 people per show, at the Rose Theatre within seconds which caused the Banquet Records site to crash.

Approximately 12,000 people tried to get tickets for the first show, which caused the site to go down and left many fans disappointed.

More tickets were later released online and in-store for the additional three shows.

Photography student Emily Acland attempted to buy tickets for Stormzy’s first show but was not successful until more were released.

She said: “It was really hard to get tickets. On the first release date, I was on the website 15 minutes before they started selling to try and refresh the site, but it crashed, and I didn’t get any.

“When they released a second date, a big group of my friends went to the box office and queued to buy them in person, and we managed to get through.”

The global star is set to embark on a world tour from February where he will play 55 dates starting in Dubai and ending in Nigeria on October 10.

He will also play the UK and Ireland in September, including three dates at London’s famous O2 Arena.

Banquet Records employee, Claire Wields, said it can be hard to book more famous artists, especially when they have a tour coming up.

She said: “He’s one of the biggest stars in the UK… The gigs had to fit in with his schedule.

“I think the first show we announced sold out within 24 seconds, but that’s only because the site crashed for 15 seconds otherwise it would have sold out in less time.

“Another show sold out instantly. I think it may have been a second. Otherwise, it would have sold out immediately.

“I think it may have been a second.”

His latest album Heavy Is the Head is now certified gold and is popular among students due to the politically charged lyrics, modern sound and his kind nature.