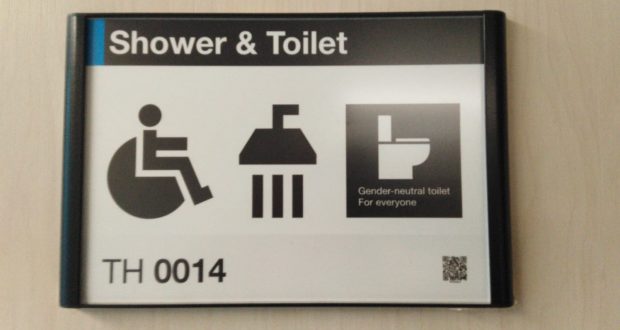 Written by Aimee Miller on February 4 2020

KU LGBT+ students were left “appalled” over the lack of gender-neutral toilets (GNT) and visible signposting in the recently opened Town House.
The GNTs are situated at the back of the £50m building that opening in January in a shared cubicle with the disabled access bathrooms and showers.

Simpkin has fought alongside other LGBT+ society members at Kingston for improvements to facilities and had hoped, after the success of the Knights Park GNTs which opened last November, the University would have taken a step in the right direction for these toilets as well.

Simpkin said it took them a total of 30 minutes to find the Town House GNTs, and any staff member they asked did not know where they were.

There are no visible signs around the building for the toilets, only for the male/female ones located on each floor.

“How has Kingston University spent so much money on Town House but has yet to provide barely adequate signage to the gender-neutral facilities,” Simpkin said.

After consulting with planners around the image used on the GNTs door, the society was also surprised to find that the agreed-upon illustration was not used, which Simpkin puts down to miscommunication or negligence.

There are no longer any GNTs in the main building at Penrhyn Road campus due to the temporary shutdown of the old library space, meaning students will need to use the ones in Town House or the disabled access toilets, which Simpkin said makes a lot of LGBT+ individuals feel uncomfortable.

The University maintains its comments on bringing equality, diversity and inclusion to their facilities: “With the installation of gender neutral toilets at Knights Park and Town House, the sign was updated to ensure it was in keeping with the University’s new signage design. The toilet symbol has continued to be used as part of this design.

“The University consulted on the designs twice with the Equality, Diversity and Inclusion Committee and have agreed on the current signage that is in use in Town House.”

Simpkin said: “I’m happy that we have the facilities, but the practical implementation has been disappointing.”