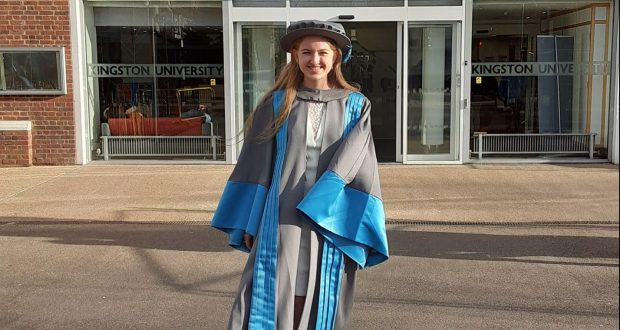 Angela on the day of her graduation in Kingston

A KU graduate has become one of the youngest PhD students in the world when she graduated in January at 20-years-old.

Angela Medvedeva from Houston, Texas, came to Kingston in September 2018 to research non-invasive brain stimulation and its effects on memory and completed her PhD last July.

The now 21-year-old said: “I wanted to express my gratitude to Kingston. It offers a tremendous amount of opportunities to grow and discover yourself, to travel, and to make lifelong friends.

“I was really blessed to find kindred spirits who, regardless of their age, some 10, 20 or 30 years older than me, shared my same energy and enthusiasm. They showed me that age doesn’t matter and that it’s about the shared interests and living life to the fullest,” she said.

Having already earned two Bachelor’s degrees in liberal studies and psychology from the University of Houston by 18, Angela wanted to continue to develop her research skills by pursuing a PhD.

While her friends and family were supportive of her decisions during her previous studies, they had mixed feelings about the prospect of her moving away for a PhD.

“I was essentially agreeing to not see my family and friends for really long periods of time, and I wouldn’t know when I would come back to visit. That aspect was hard because a lot of the questions surrounding my decision were, ‘why can’t you find the programme that you need here?’.

“I had to think about that a lot because this was a huge life decision. I wasn’t just going for a year or for a semester to study abroad. I was signing up to go and potentially stay there and have a job there, which is something I actually considered,” she said. 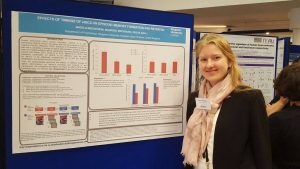 Angela settled on applying for the PhD programme at KU because she thought it would offer her the chance to learn new skills, flexibility, and independence.

As well as conducting experiments here at KU, the PhD graduate was also responsible for supervising a project in Russia, which involved going to a laboratory in Moscow.

Angela, who can speak fluent Russian, English, French and Spanish, was able to visit her family in Moscow while also visiting the laboratory.

“I had to fit in times to visit the labs at the National Research University in Moscow while also visiting my relatives there. Sometimes I’d only have a week to visit and see both places.

“I’d be in contact with the lab for two or three days, and we would try to fit everything we needed to check in one day. It was challenging, but we had a lot of contact through email, skype and remote communication,” she said.

Angela also said she faced many challenges during her PhD, including living up to the reputation she had gained through press coverage.

“During my first semester at university, I already had this journalism-evoked image to live up to. Showing people that sometimes who I am is not completely captured in articles was something I had to deal with as well,” Angela said.

Adjusting to life in the UK was another unexpected challenge for Angela, but she grew to love British culture and misses many things from her time here.

“I miss the people most of all. I loved cooking with my friends and learning how to cook these complicated Indian and Pakistani dishes and sharing some Russian recipes and things like American pizza.

“I know British food is sometimes a cause for controversy for foreigners, but I love it. I love the whole pub-style,” she said.

Angela also said that finding willing participants in her experimental work was another challenge to overcome.

As part of her time at KU, Angela was able to travel around the UK attending science conferences to present her work in Newcastle, Plymouth, Bangor, and King’s College.

She said one of the best things she did while researching abroad was spending five days dissecting human brains that had been donated to science as part of a neuroanatomy workshop at Bangor University in Wales. 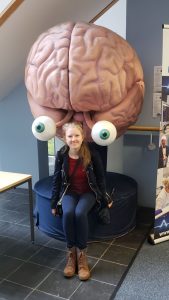 She was able to dissect human brains at Bangor University

On top of her studies, she also took on a lot of different jobs including being a halls a connector, student ambassador, and even teaching bachelor’s and master’s students studying psychology.

“Actually, making that connection, earning their respect, and getting to know them as students, future researchers and peers was really amazing.

“At one point, my age became known to the class, and they continued to respect me which was really amazing,” she added.

While it was a lot to juggle around, Angela said doing a lot of work outside of her research helped her to keep her emotional, mental and physical health in balance.

At the start of her second year, she ended up at A&E multiple times and was put in the stroke ward until doctors ruled out any serious conditions.

“At the time, I was overdoing exercise and trying to eat healthier, but the inconsistency and relapses to unhealthy habits caught up with me.

“It’s a balance between how you push yourself with maintaining your health. I think that no degree is worth losing your health over, and your health should really be a priority,” she said.

Since earning her PhD, Angela has moved onto a post-doctoral fellowship at the Department of Neurosurgery at the University of Texas Medical School in Houston.

She said it is an extreme extension of her PhD research and is working in a laboratory that uses MRI scans and other forms of brain stimulation to find out more about how the brain works.

The research is being used to help patients with drug-resistant epilepsy, brain tumours, and speech dysfunctions.

Once she has finished her fellowship, Angela wants to combine her neuroscience research with becoming a neurosurgeon.

She said: “I have this insatiable passion for working with the open brain and contributing to making patients’ lives better.

“Having been to many brain surgeries already as part of this fellowship, I’m now even more convinced that I want bridge research and surgery by learning more about how language works in the brain.”