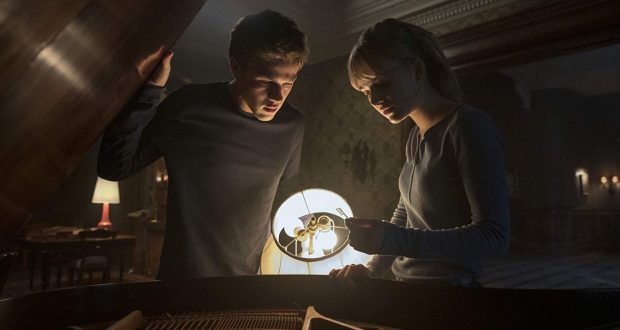 With its many panning shots, supernatural entities and small-town vibes, one can’t help seeing the Stephen King adaption parallels in this show.

You wonder: Am I in The Shining?

Based on a graphic novel by Gabriel Rodriguez and Joe Hill, Stephen King’s son, the plot follows the Locke family as they move back into their ancestral home in Maine after the death of their father.

Siblings Tyler, Kinsey and Bode spend the entire series discovering, messing around and then protecting keys with magical powers from a sinister lady in a well.

The series is a fascinating concept until you’ve hit five episodes worth of expository sludge. It felt like being stuck in traffic for five hours until the show started to pick up.

Before it does, though, you will find yourself blinking and thinking ‘What?’ several times. Consistent storytelling is not the key component of this show.

While mostly ahead of the audience, the show continually tripped over itself, explaining the rules of the universe, which didn’t help the predictable dialogue that became so cliché that we started filling in the blanks.

At one point, the villain, a stylish gender-ambiguous demon with a strangling fetish, puts on a crown that controls shadows to the tune of Billie Eilish’s You Should See Me in a Crown.

The choice of songs was also quite strange overall. Typically, the music reflects the situation or feelings of the characters.

It felt like the songs were placed there to fill dead air. Or in this show’s case, poor transitions, if there were any.

How do you go from talking about a life or death situation to a slow panning shot of the school accompanied by techno music?

While we mostly did not like this series, there are some strong points to highlight. The beautiful cinematography, for instance.

None of the main characters, at least in the beginning, felt worth being invested in.

The older siblings arcs are cut and dry, with Tyler, who feels responsible for their father’s death, and Kinsey, who has to deal with her fear after a traumatic experience.

The occasional dispassionate shouting matches fail to heighten the tension, and the youngest sibling, Bode, kickstarts the plot by not following the rule of stranger danger.

But if it weren’t for his uncanny ability to survive anything the plot throws at him – thank you scriptwriters – then Bode, played by Jackson Robert Scott, would be dead. And we wouldn’t care. Not particularly.

But Hill isn’t as bloodthirsty as his dad – the famous horror writer, Stephen King.

It’s a shame how uninteresting any of the characters are, given how interesting their thought process is, seen in a few sequences where one of the keys is used to reveal unseen parts of characters visually.

For example, Kinsey’s mind is shown to be an ultra-organised mall. This is the show at its potential best, letting its visually enchanting world speak for itself.

The season ends on a high note, the predictability burnt away by literal fire and an ending with so many open doors and one key to open them all.

We still have so many questions, which might not even get answered if Netflix decides not to greenlight a season two.