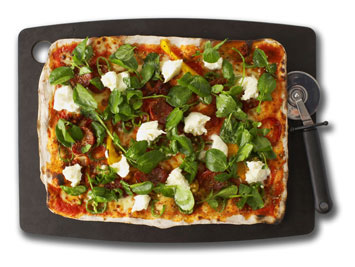 When we arrived at the new-look Pizza Express in Kingston’s Rotunda we encountered inviting aromas and a relaxed atmosphere.  The restaurant has a modern look, with a wall of glass to look through to an urban view outside and a chef’s space in its centre.  The décor was inspired by Sir Terence Conran, with the space well-utilised.  Our service was exceptional.

The restaurant has a new menu along with its new design.  We set out on a rainy Sunday evening to see what dishes we could recommend to Kingston students.

Logan recommends:  Melanzanine, a new small sample of a pasta entrée of layered aubergine, tasty tomato sauce and Gran Moravia cheese.  This is an excellent light appetiser for vegetarians or for anyone who wants a flavour tease without spoiling their main course.

Chris recommends: With their Dough Balls Formaggia, Pizza Express have added to the classic dough ball formula by baking them with cheese, adding an extra layer of flavour. If the thought of that doesn’t melt your tastebuds, I don’t know what would.

Logan Recommends: Francesco Mazzei Calabrese, described as Pizza Express’s “hottest pizza”.  This pizza, for those who like some spice to their food, will not disappoint.  Try it with a pinch of garlic oil to ease the heat from the two different types of spicy sausage.  The many different peppers added the extra flare that I would certainly return for once again.  (Best taken with a citrusy white wine)

Chris recommends: The new Melanzane pizza is great as a vegetarian choice or as an alternative for someone seeking meaty flavour on a meat-less pizza. The aubergine gives the pizza a rich salty-sweet texture, and stands strong as a less traditional alternative to the Margherita.

Logan recommends: Primo Gelato, two new types of gelato with satisfying tiramisu or ‘banoffee’ (banana toffee) flavours.  If you are undecided between the two, simply try one scoop of each.  I was not convinced that I liked tiramisu until I tasted this gelato.

Chris recommends: The 220 calorie Leggera Chocolate Cheesecake is rich in flavour, and amply filling despite its ‘light’ status. I chose to pair it with an Irish coffee, but a simple Americano also works great with chocolate. 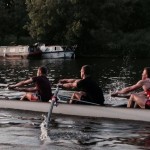 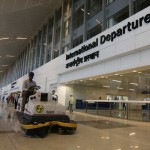