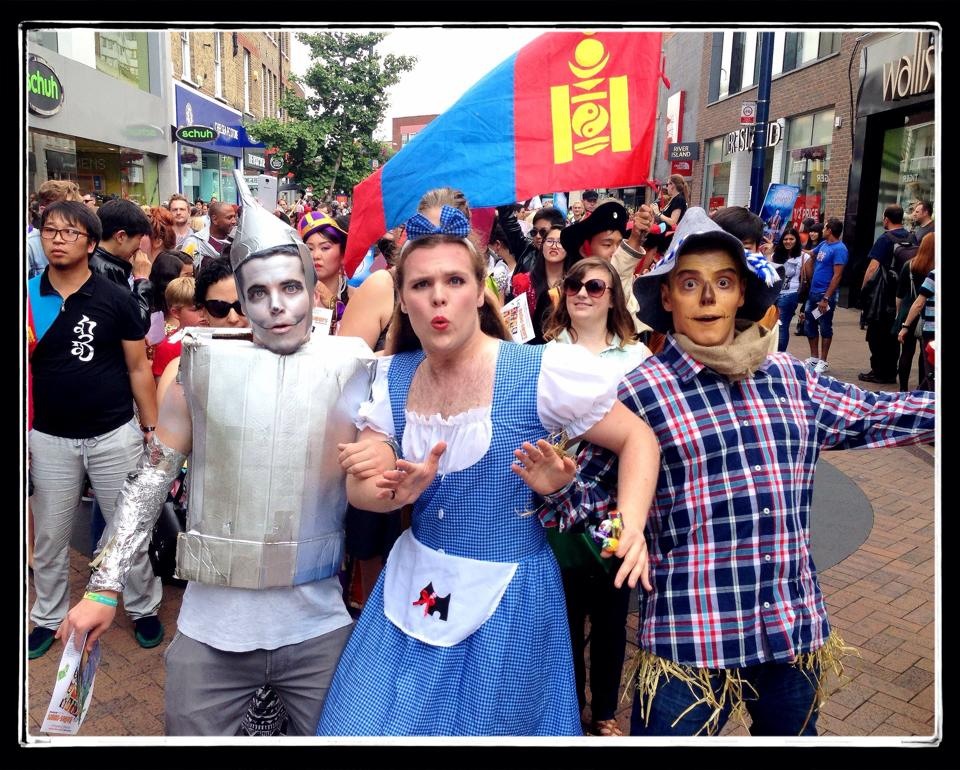 Written by Elin Martinsen on October 21 2014

“I was with a girl and I was romancing her and I meant to say ‘bad girl’ but it came out as ‘bad clown’,” John Bond, 20, told The River Online last year. “I told people the story and everyone found it hilarious, so we thought Bad Clowns would be the comedy name.”

One year has passed since he, along with his fellow drama students, Sam Walls, 21, and Christian Dart, 19, performed their first show together as the stand-up comedy group Bad Clowns.

Their concept of taking a well-known story and act it out based on suggestions from the audience has been warmly welcomed by comedy lovers in the Kingston area.

“That’s something that is really good about the shows we do, because they are always improvised,” said Christian. “Even if they have the same concept, they’re never the same to watch.”

The third-year students all agreed that it is the shock and unexpectedness of their shows that make people burst out laughing.

“Most of the time, we’re just as surprised as the audience at what comes out of it,” said John.

The up- and- coming comedians will double- bill with the TV comic Ray Peacock next Thursday at Queens Gastro Bar & Grill, as part of the Laugh Kingston Comedy festival.

Peacock has done several warm-up shows at Russell Howard’s Good News and That Sunday Night Show, as well as hosting the successful podcast The Peacock & Gamble.

Bad Clowns will be performing their newest show, Clowns of Oz, an improvised story heavily inspired by the classic 1939 movie, Wizard of Oz, hence the name.

“Once we came up with the story improvisation idea, we sort of just went through well- known stories that we thought would work well,” said Sam, who will be playing The Scarecrow.

“I think, for some reason it just stuck out for him to play a woman,” John, or Tin Woodman, continued, pointing at the Dorothy impersonator, Christian.

“Every time, in every show,” Christian replied.

He has tremendously long hair, but that is about the only feminine feature he has, being an about 6ft tall, bearded man.

“Oh, she is beautiful, oh yes,” Christian said, referring to himself as Dorothy.

Sam did not agree: “He has this odd facial hair poking through the foundation,” he said, while pinching his cheeks to visualise the look.

Clowns of Oz resulted in their first sell-out gig this summer, at the International Youth Arts Festival (IYAF) in Kingston.

James added: “We didn’t see it coming either. We went through a long time of ‘you’ve sold seven tickets. You’ve sold eight tickets’, and then suddenly, they were all gone.”

Maybe it was the dressing up and dancing down the Kingston High Street while handing out lollipops that caught people’s attention, because that was one of the ways they promoted themselves during the summer. 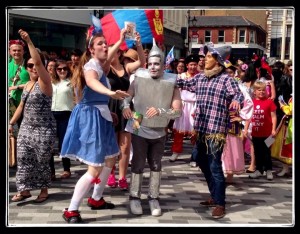 Attention grabbing performances has always come easily to Christian, who said he has “relied heavily on trying to make people laugh to be social” for as long as he can remember.

“Ever since primary school I actually wanted to be a clown,” he said.

John, on the other hand, said: “I was a late bloomer. I was a quiet, shy school kid and then, I think it was in High School, I came out of my shell.”

Sam nodded his head, indicating that he as well, was a late bloomer.

Now they are facing their biggest challenge yet, filling 300 seats at Kingston College’s Arthur Cotterell Theatre (ACT) this Christmas.

“It will be the biggest venue we’re going to play,” John said. “We’re doing a Christmas carol for two nights, which is something we never usually do.”

Christian said: “That’s going to be so exciting!”

The humorists also have big plans after graduating, and would like to continue what they are already doing.

One goal is to perform at the Edinburgh Fringe Festival next summer, the largest arts festival in the world, which has hosted comedians such as Ricky Gervais, Bill Bailey and Craig Ferguson.

“That’s what we’ve been saving all our money towards,” Sam said.

Hopefully, we will see a lot more of Bad Clowns and their chaotic shows in the future.

If you would like to see these guys perform on October 23, head to kingstoncomedyfestival.com for tickets.