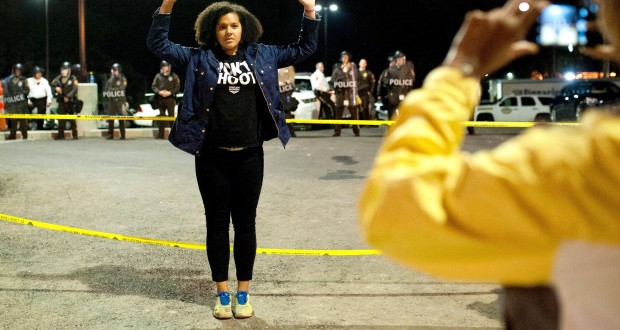 “I can’t breathe,” US police and their culture of violence

Written by Bauke Schram on December 5 2014

‘These white men are dangerous,’ said chief Powhatan, Pocahontas’s father in the 1995 Disney adaption of the story of Pocahontas Powhatan. Almost ten years after the movie adaption and little under 400 years after the real Pocahontas died, this quote from the animated movie is a popular meme, and with good reason.

Accounts of several cases of police violence against  American young black men are covering the front pages of newspapers once again. And another grand jury has decided not to mete out justice, refusing to indict an NYPD officer who killed a black man using an illegal chokehold in broad daylight. The decision triggered a second wave of protests in Ferguson, Missouri, where unrest erupted recently after  Darren Wilson, the white police officer who killed unarmed young black man Michael Brown, also walked out of court without facing any charges.

Darren Wilson finally spoke about the encounter with ‘Big Mike’ Brown that happened on 9 August this year in an interview with ABC news. George Stephanopoulos asked Wilson some soft questions, and Wilson did nothing but defend himself, showing no remorse, no sign of being hurt. He said he did not feel guilty because he had only been doing his job, he claimed, and trying to protect himself. He also made claims that contradict forensic findings as well as witness statements, even denying that Brown ever shouted ‘hands up, don’t shoot’. All Wilson did was defend himself, and he did not even seemed bothered by the fact that he had killed a man.

The interview made me angry. Not only did Wilson claim he could not and would not have done anything differently, because he thinks he was in danger (despite the fact that he shot Brown in the head, instead of in his leg or hip), he also kept focusing on himself, not on Brown or his family, who have lost their loved one forever. It was clear Wilson did not care about Brown’s death, which just seems to contribute to the idea that he did not consider Brown to be a person. Brown’s mother said as much in comments after Wilson’s interview aired – she said that a decent human being would feel troubled by having killed another, even in self-defense, but Wilson seemed utterly complacent.

As someone who has been living with white privilege all my life, I could not comprehend this phenomenon. I cannot imagine a family member being shot, being murdered, no matter how violent or aggressive their behaviour might have been. I cannot imagine the killer walking free, without any charges. Darren Wilson killed someone. Lesley McSpadden’s son, who was just a kid, is dead, yet the system does not seem to recognise the institutional culture of racism that permits such pervasive violence against young black men. The system does not seem to acknowledge the fact that Brown was a person, an individual, a boy. His blackness seems to deny him this recognition.

The mere fact that we are talking about this situation should be thought of as ridiculous. A policeman kills an unarmed boy, and walks away free. Police violence against black people is cruel and heartless, and the response is incredibly backdated. It is the 21st century, but Martin Luther King’s dream has still not come true, while Mike Brown’s family is experiencing a life-long nightmare.