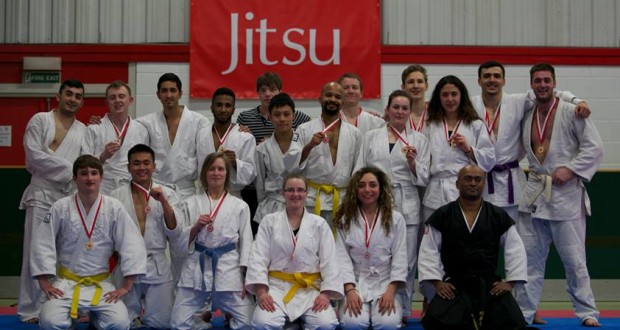 The club managed to beat 500 competitors, mostly from other universities, to win the top prize at the national competition in February 2014.

The Jiu Jitsu president, Nick Finta, said: “Last year we competed in several friendly competitions in the build up to the national competition which was at the end of February last year, and the club did exceptionally well, winning the overall gold and claiming the title of national champions.”

The club had the highest medal score in the competition with 17 medals, eight golds, four silvers and five bronzes.

Last month eight members received new belts through grading, ranging from yellow to orange. Out of the 90 people at the grading, Nick was one of three people in the London region who received a distinction.

Nick said: “Getting Yellow three was awesome. Still not sure how I managed it, but it’s extremely satisfying to see the work at training come into fruition, it’s brilliant. It makes you proud of what you have achieved, both individually and as a club.”

The sport, which has become increasingly popular, is a martial art founded in Japan, combining self-defence with grappling combat with a system of throws, joint locks and strikes.

“I think the best part of it though just comes down to the fact that it’s a very sociable club. Everyone there has at least one common interest and I’ve met a great group of people doing it.”

The national championships takes place between February 28 and March 1 in Northampton.

Joanna is Chief-sub for River online for group C. She has worked as an editorial intern at Radio Jackie. She currently has a lifestyle and opinion blog and contributes to fashion websites.