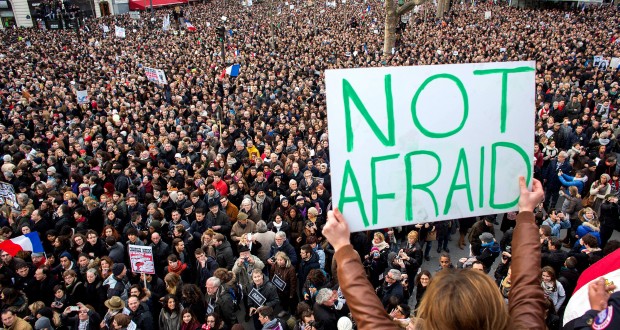 Free speech is not just a Western value

It is always a shock when a tragic act of terrorist violence strikes the western world, because suddenly the threats of such acts happening in our midst becomes reality. The London bombings, 9/11, and now Charlie Hebdo. You would almost forget Anders Breivik, who mercilessly killed 77 people in Norway, as the popular imagination tends to leave him out because he did not kill in the name of Islam.

Neither did the Kouachi brothers, if you ask me. The Hebdo shooters had a criminal background and did not exactly fit the ‘mould’ of an Islamist extremist with their smoking and drinking habits. Yet Rupert Murdoch says all Muslims should be held accountable for what they did. Yet the world unites against terrorism in a one million people strong demo in Paris, attended by Benjamin Netanyahu and Putin (does no one sees the irony in Putin protesting in favour of freedom of speech?). Yet thousands of Dutch Muslims feel that they have to distance themselves from the attack, tweeting ‘#NotmyIslam’. Yet in several places in France mosques have been attacked in the aftermath of the Paris shooting.

Of course, freedom of speech is a vital part of democracy and this attack is absolutely horrendous. Killing people because of their expression on paper is a crude violation of basic human rights. As an activist, I have learnt that oppression is not a competition but I cannot help but notice the unbalanced reaction to the Hebdo shooting in comparison to the tens of thousands of Middle Eastern lives that have been ended by extremists.

The idea that Muslims should be held accountable for the acts of Islamist extremists disregards the deaths of so many Muslims and other Arabs who were killed by extremists. And we are too quick to jump to conclusions about terror attacks and their links with ISIS. However, is it not ironic that the world mourns France because of the act of Islamists, while almost a hundred Syrian Muslims who fled a country filled with extremists are still stuck in Calais, reluctant to claim asylum in France as they feel now that their lives would not get any better?

Why does the majority of the Western world hashtag ‘#JesuisCharlie’ while other names, such as Hussein Ghrer, Kharb al-Dabbas, Bassel Kartabil, and Salma Jamal Abd al-Razak barely ring a bell for many Western people, even free speech activists? These are the names of Syrians who are locked up and have to fear for their lives every day, like many others. Speaking up in Syria, Egypt, Iraq, Nigeria and many other countries still holds too high a cost for many Muslims.

People are writing blogs and magazine articles claiming that freedom of speech is not a value Muslims share with Western people, completely ignoring vast numbers of Muslims who do share those values, stripping Muslims of other aspects that form their world view. People like Rupert Murdoch or Geert Wilders in the Netherlands ignore the fact that Muslim values are not solely based on their religion but also on things like their local background, culture, family and personal experiences. And valuing the right to free expression is not a Western value, but one held by many democracy-seekers and liberal across the world, across religions.

My thoughts are with the Charlie victims, but the back of my mind keeps pulling me towards those innocent Muslims who get disregarded when we talk about protecting freedom of speech. We need to realise that Western lives are not more valuable than others and we need to realise that Islamist terrorism is not more harmful than any other form of terrorism.