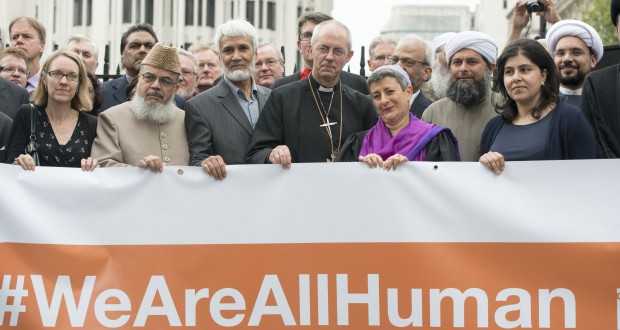 Since the attack of the Charlie Hebdo staff on January 7, the slogan, “Je suis Charlie” has become a symbol for freedom of expression. It has also united millions of people around the world, online and in demonstrations showing that cultural and religious differences can stand up against the evil of violence and injustice. A day that marks this unity is World Religion Day, January 25, and as religion at times being a reason for conflict and separation, the purpose of this day is the opposite.

The president of the Kingston University Buddhism society, Faith Gaiger-Roscoe, 20, said, “I think World Religion Day is really important because of the climate of conflict we have in the world, which is a lot of the time based around religious misunderstandings. The reason for this is because the lack of understanding of faith and not because faith is a nattily bad, but because people don’t understand the foundations of it.”

Since the attack of the satirical magazine a large wave of anti-Muslim acts, such as protests and vandalism of mosques have spread around Europe. In a mosque in Le Mans, west of Paris, three grenades were thrown inside and a bullet hole was found in one of the windows.

In Borås, Sweden, a mosque was vandalised with the text “Viva La France” sprayed to it and a pig’s head left outside the premises.

On January 12, the German political movement Pegida, which stands for Patriotic Europeans Against the Islamisation of the West, gathered an estimated of 25,000 people to demonstrate in Dresden, Germany. They were accused of exploiting the Paris attacks to attract more supporters.

The Paris march on January 11 gathered around 1.6 million people, including over 40 world leaders who linked arms in solidarity. An aspect that showed this unity and solidarity at the march was the presence of Israeli prime minister Benjamin Netanyahu and Palestinian president Mahmoud Abbas.

“I think that in the face of such sadness it was incredible to see people come together and it shows that’s what the majority of people stand for, “said Ms Gaiger-Roscoe.

Ms Gaiger-Roscoe added that it is important to remember that there are people focusing on equality, diversity and inclusivity in moments of atrocities. As well as remembering that the majority of people from all religions are good and that a lot of the times media and publicity slanders them.

The key to break down barriers is education and understanding of different faiths. For this reason Ms Gaiger-Roscoe explains why World Religion Day is important because it “shows that faiths can work together.”

She added: “If we took time to learn about all world religions then we would understand nattily that these faiths just want us to love and be nice to each other.”

Regardless of belief, Ms Gaiger-Roscoe stretches the importance of students getting involved by going to different meetings to learn.

“You don’t have to be of faith to go to any of them. It is just a chance to experience another culture and other people and other ideas.”

With 14 religion based societies at the university, even for people of faith there is a chance to learn from each other’s religion and share the similarities.

“We have a good atmosphere, there is no conflict, no disagreement, and there is no unfriendliness in the societies and in between the different faiths.”

To mark World Religion Day, Ms Gaiger-Roscoe is organising an interfaith conference on Monday, January 26, where members of each religion will have the chance to talk about their faith.