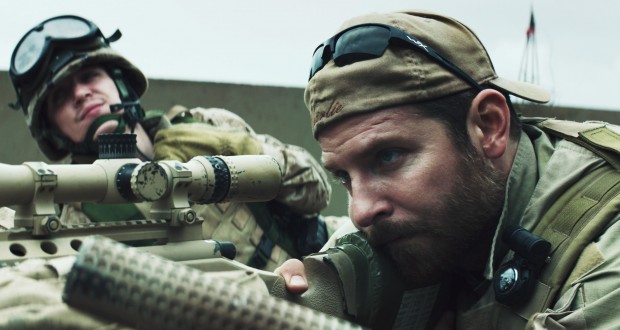 Written by Anthony Waterworth on January 20 2015

Clint Eastwood and Bradley Cooper have delivered a tense, insightful and action-packed thriller based on the true story of sniper Chris Kyle, which brings home the reality of war.

The film reconstructs the life of Chris Kyle (Bradley Cooper), a Texas rodeo rider who became a Navy SEAL and is now recognised as the most deadly sniper in American history, with 160 kills in Iraq.

Kyle continually battles with not only the war zone, but raising a family with his wife Taya (Sienna Miller) and once he becomes known as ‘the legend’ in Iraq, suffers from post-traumatic stress when he returns home.

He begins to manage the symptoms by helping out injured soldiers that have made it home from the fighting, but he was tragically murdered by a war veteran that he was spending time with on a shooting range in Texas.

Eastwood directed the film in a way that follows the mind set of Kyle,with endless close ups of Cooper’s bearded face and flash backs of his youth.

Cooper put on considerable size to fit the role of war hero Kyle, father of two, and his acting does justice to the trauma issues related with returning home after serving in a war.

The film ends with original footage of Kyle’s funeral and the various ceremonies held for ‘the legend’. There is no music for the end credits, which created an eerie environment where nobody dared to make a sound. I will certainly watch it again.