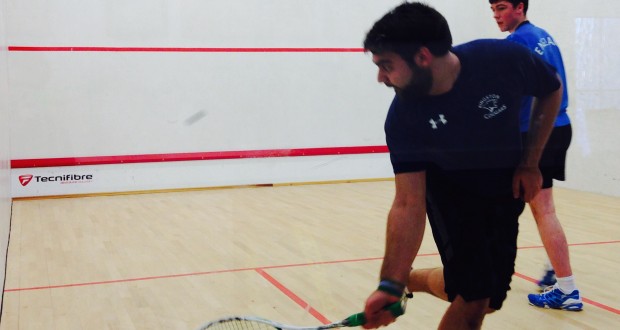 Kingston squash clear up last day to save tournament

Written by Anthony Waterworth on February 12 2015

Kingston won every match on Sunday to finish 13th at the Roehampton Club University Cup over the weekend.

The team were disappointed with their results on Saturday, which meant they qualified for the lower seeded matches on Sunday.

Christopher McArthur, captain of KUSC, said: “I was frustrated with the group that we were put in on Saturday, we played against some of the best squash teams in the country so we struggled to get a result.”

Last year, Kingston only managed one set of victories which all came from the same player, so despite any disappointment, the team has noticeably improved.

“I wanted us to get in the top 12 over the weekend, but after Saturday’s poor results, the best we could achieve was 13th, which we did,” he said.

There were notable victories for Clarke and Robb Wright against Surrey on Sunday and the tournament will build the team’s development moving into the upcoming LUSL fixtures.

Marthe Helene Solberg is the only female player that competed in the tournament and she fared well against the other competitors.

“It’s frustrating that we can’t manage to get enough girls to play squash in the same team competitively. We attract players at the start of the year but they are only beginners.”

The tournament was held at the prestigious Roehampton Club on the borders of Richmond Park and with five squash courts, was well equipped to do so.