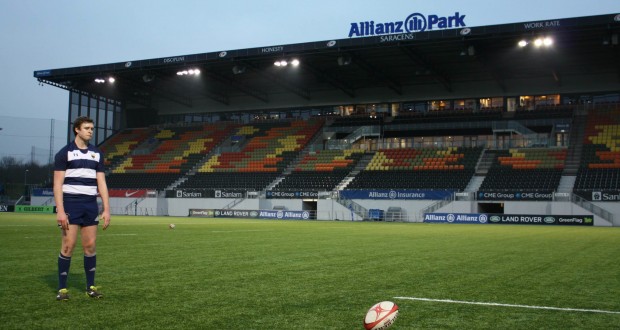 Josh Twyford lining up a conversion

Written by Anthony Waterworth on February 16 2015

KU rugby enjoyed a 55- 0 win over Middlesex University on Wednesday at Allianz Park, home to Premiership side Saracens.

Following a delayed kick off, President Paddy Murphy scored four tries under the floodlights to help his side build momentum at the business end of the season.

Full-back, Murphy, said: “Although it was a great experience for the lads to play at such a prestigious venue, the win was most important. We are now in a strong position to get promotion.”

The stadium was only built two years ago and has a capacity of 10,000, it is famous for becoming the first 4G (artificial) playing surface to feature in professional rugby.

Because of the pitch quality, the match was played at a very high pace and called upon the fitness of both sides.

Kingston flanker and Saracens fan, David Holby, said: “It was a dream come true to play on my team’s pitch and I’m grateful for the opportunity.”

Middlesex lost two players early on through head injuries and the Cougars punished them with tries by flanker, Connor Cooper and Fly-half, Josh Twyford.

Captain, Twyford, was off form from the boot but took full advantage of the space given by the home side’s poor defence and created several scoring opportunities for his side.

Twyford said: “It was cool to play in a top stadium like the Allianz and I enjoyed the artificial surface, it’s a nicer game without them muddy puddles.”

There were a further two tries from Murphy, and wing Jeffrey Amoateng who looked a strong threat all evening.

The first half finished 24 -0 to Kingston and after the break it got worse for Middlesex when number eight, Lewis Tucker powered over the line following a scrum and Murphy continued his scoring montage with a further two.

The cougars are now just two wins away from lifting the league trophy and earning promotion, but the table leaders Portsmouth are due a visit to Tolworth to challenge for the title.

Twyford said: “The whole season rests on the match against Portsmouth in two weeks and we’re desperate to cross the finish line on top.”