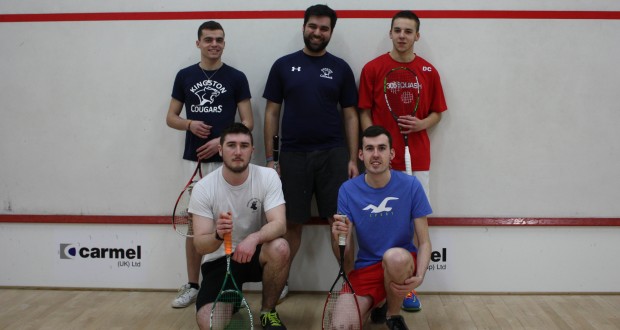 The team of five on match day

Written by Anthony Waterworth on February 19 2015

Kingston squash team beat Royal Holloway three matches to one at home on Sunday to climb the league table.

Captain, Christopher McArthur, won the final set of his match to come out on top in a tense encounter despite taking a two nil lead but he kept his cool to see off the opposition.

McArthur said: “It was tense, but I’m relieved to get the win. I was expecting it to be easier than it was so i’m disappointed that it went to the final set.”

There were only four matches played instead of five due to a no-show from the opposition and Kingston were missing two of their top players which worried McArthur.

Ruben Pinto won the first match, despite only starting this year, taking advantage of his ability to cover the court quickly but Jake Connolly fell short against his opponent to level the scores one match each.

McArthur said: “I’m really impressed with Ruben. He only started this year and hadn’t really played any racquet sport in the past and he has beaten some really experienced players and he’s certainly a hot prospect for the future.”

The final two matches involved Dan Clarke and McArthur. Clarke made his opponent look like a spectator winning his match with straight sets and McArthur was left with the pressure to finish of Holloway which he did so in the final set.

Calum McDonald was left without a match but but Surbiton Racquet club allows the practice of club members prior and after the matches for development purposes.