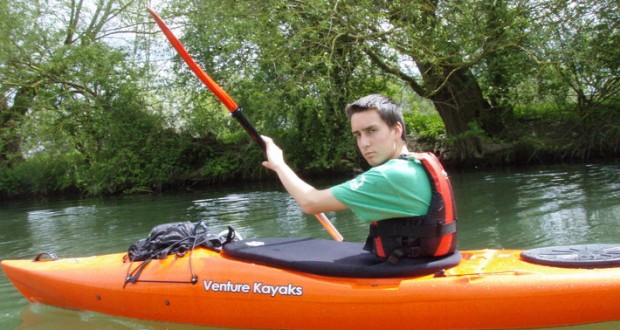 Chris Fox kayaking on the river

Written by Anthony Waterworth on March 2 2015

A KU kayaker had his club keys confiscated for ‘breaking and entering’ the Albany Canoe and Sailing Centre in Kingston in order to aid his club.

Chris Fox, KU Kayak Club vice president, was disciplined by the SU after he was reported to have ‘jumped the fence’ on more than one occasion to access the club’s kayaks and go for a paddle.

Fox said: “I have only been over the fence twice. The first time was during the Christmas period and the second was a Wednesday, January 28 at 11:45am.”

Fox is a highly qualified kayaking coach and has managed to get free Foundation Safety and Rescue courses and level one coaching courses for fellow students.

The first time he entered the club he was dropping off painting and building equipment he had been using to refurbish the club’s shed that stores the kayaks.

He said: “I have spent a lot of time painting the shed, cleaning the moss off the roof, fitting and repairing and adding right angle brackets in the KUKC shed and organising and counting all of the KUKC equipment. I am one of the most committed KUKC members the club has.”

The second time Fox entered the centre he went for a solo paddle before their 3pm session that afternoon so that he could do some forward planning for the route to spot any dangers.

He said he remembered that the SU had requested an equipment count, so at the same time he was in the centre, he took out all of the club’s kit and counted it.

Fox said: “To run a trip down a river you should always do forward planning, which I also walked down before hand, so I knew the river layout and any problems in running it.”

Fox also works hard on the social side of the club and has helped to organise Wednesday socials throughout the year, the club are considering to move their socials to the Minima Yacht club, next door to Library nightclub.

“I only want what is best for KUKC and I am rewarded by them taking away my shed key.” Said Fox.