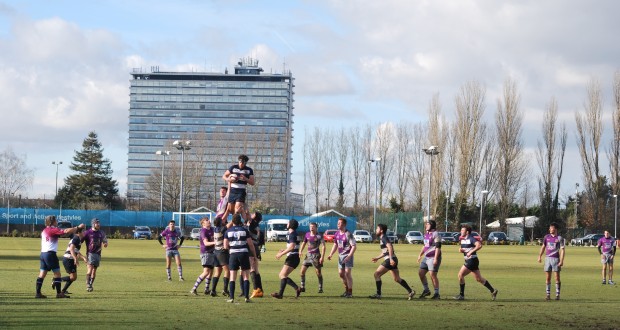 Kingston rugby first team held on to beat Portsmouth in a one point thriller to go top of the table with one league match to go.

Flanker David Holby led the charge to victory with a man of the match perfomance in the tense battle for first place in the table.

“For me I was just happy to be a part of a good team experience,” Holby said. “i thought the forwars worked hard from the first minute to the 80th. We made it a lot harder probably in the last 10 to 15 minutes.”

The last ten mintes proved to be tense moments for Kingston as Portsmouth’s substitute winger paced his way past the Kingston defence to score two tries which were both converted to put the score at 25-24.

As the closing minutes ticked away it looked as though Kingston might throw away the victory.

The home side pushedforward for the remaining minutes and a huge sigh of relief echoed around the crowd of fans at Tolworth as the final whistle blew, the team roared triumphantly in celebration.

Holby said: “It got a lot tighter than we wanted it to but we can’t expect anything less, the boys pulled it out of the bag.”

Kingston were dominant throughout the first half in possession and in the scrums after conceding a penalty early on. KU struggled to scored despite dominating play, but after several close calls Kingst broke the defence and Holby scored the first try to go two points ahead.

As the first half came to an end, Kingston came under pressure from Portsmouth and conceded a try which was converted and the Cougars went into the break 10-5 down.

KU continued to push forward on the Portsmouth defence early in the second half and were quickly awarded with a penalty to go 15-10 following an early try and conversion. Kingston continued dominating and score two more tries.

Captain Thomas Walsh said: “I’m so proud of the boys toay, I thought when they scored before half time that it would be uphill from there, but we were outstanding for the next 30 minutes or so.”

The win puts Kingston level on points with Portsmouth, but with one match to go against bottom of the league Westminster and a large point difference, the Cougars look sure ot gain promotion.

Holby said: “We have potentially gained promotion. We played the leaders today, it’s a wonderful experence to say I’ve been here three, four years and just waited for this, to do it with this bunch of boys makes it especially worthwhile.

“A huge team effort, the coaches, the players, the physio, everyone that helped here, the support, really helped us in the final 10 minutes.”

The only result that would stop Kingston gaining promotion would be Portsmouth beating King’s College by more than 103 points next week.

Kingston will play the semi-final of South Eastern Conference Plate this Wednesday against UCL.