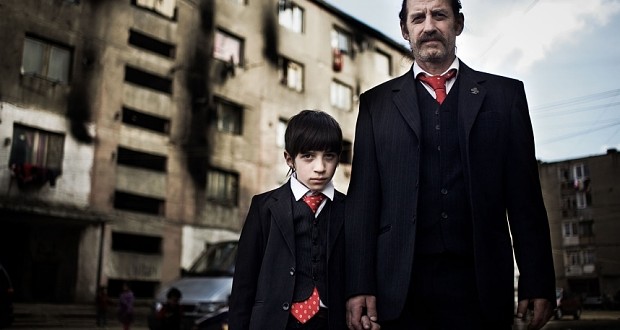 Sandu and his son Antonio outside the apartment block they live in. Credit: Channel 4

Written by Elizabeth Stromme on March 11 2015

By Sarah Sinclair and Elizabeth Stromme

A Kingston student is outraged over Channel 4’s new documentary The Romanians Are Coming, saying it will lead to a “Nigel Farage stand on immigration” in the run-up to the general election.

International relations and Spanish student Alexandru Ferau said the programme felt like an attack upon him and would lead to a distorted image of Romanians living in Britain.

Ferau said: “I understand it’s a TV show and they want drama…but I do feel it was an attack especially as we have the elections coming up.

“[It] will make people question, do we still want to be in the European Union? Because the Romanians are coming – it’s the flood of Romanians!”

Romania has been a part of the EU since 2007 with a restriction on movement for workers. The heavily enforced restriction ended in January 2014 to massive protests, especially from The Daily Express which started a crusade against the immigrants.

The first episode of the show aired on February 17, and has since attracted immense criticism online and several petitions have been launched to demand an apology from Channel 4 for their portrayal of the UK Romanians.

At current the petitions have almost 10 000 signatures and one petition on change.org, said: “[It] is purposely dehumanising and through its misleading nature it is used to promote a false image of Romania and its people in the mind of others.

“For this program to be called a documentary a variety of stories should be presented… otherwise this program is nothing but propaganda.”

The show has received a harsh welcome in Romania and Ion Jinga, the Romanian ambassador in London, has accused the producers of the show of reinforcing negative stereotypes.

Jinga also stated the documentary “ignored the fact that, in their overwhelming majority, Romanians living in Britain are well integrated into the local society”.

When contacted by The River, Channel 4 said: “Immigration is one of the most pressing issues facing our society. How to deal with these issues, and better understand them, are key questions at the upcoming general election and it is vital that public service broadcaster such as Channel 4 explores these themes.

“The series doesn’t shy away from the social issues that can come alongside immigration, but it also features the courage and resilience of some individuals, families and their communities as they face tough times and grapple with personal demons.”