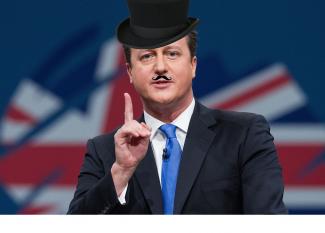 It was party conference season in our beloved nation and Mr Cameron did not disappoint us when it came to tugging down the curtains on this overrated West End show.

His latest announcement that benefits received by 25-year olds should be cut in order to reduce their reliance on benefits was hardly surprising, was it?

What group hasn't the Conservative-led government called benefit scroungers? And what welfare system will be left when these guys are finished?

Well, let’s see what they’ve been up to for the last six months.

-Disability allowances have been scrapped, so if you’re disabled, let us hope you can do the impossible and live on five pounds a day under the new scheme.

– Access to legal aid was cut earlier this year, so dig deep if you want a lawyer who gives a toss.

And now it is “young people”:

“There are still over a million young people not in education, employment, or training. Today it is still possible to leave school, sign on, find a flat, start claiming housing benefit and opt for a life on benefits.”

Yes, Prime Minister, on your planet all under 25’s would be doing one of the above. But the world is very different and it worries me that the man in charge of this country has such a simplistic view of how life works.

Not all of the one million people Mr Cameron categorises as “young people” abuse the system.

The origins of our welfare system go back to the state taking responsibility for the less fortunate individuals in society and to help provide a certain standard of living.

Let’s hope someone stops Mr Cameron before the inevitable happens: the poor becoming poorer and rich becoming richer until the yawning gap of inequality opens a rift in time and transports us back to the Middle Ages.