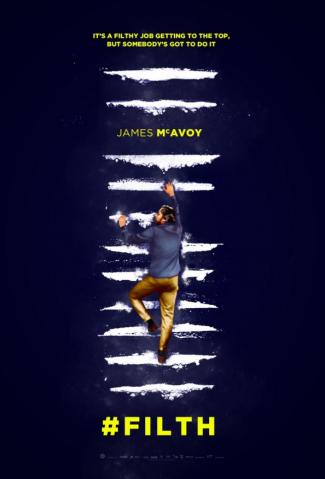 Filth is a film adaptation of a 1998 Irvine Welsh novel of the same name. It stars James McAvoy and has been written for the screen and directed by John S Baird.

Irvine Welsh came to prominence with the release of his remarkable first novel Trainspotting, a book of rare brilliance that captured the imagination of many with its visceral depiction of life as a heroin addict and other stories.

Its successful adaptation by Danny Boyle brought British cinema back to a gritty greatness that had become a tad stale and possibly a little benign.

Almost but not quite

Filth comes incredibly close to equalling this feat yet falls ever so slightly short of the mark. This is not to say that this is not a very good film, however.

McAvoy, as the critics have written, does indeed give an impressive performance as the misanthropic, misogynistic, lying, blackmailing, drug taking policeman, Detective Sergeant Bruce Robinson, and it is his mesmerising performance that gives this film its core strength.

Emotionally this is a film that effortlessly touches the places it attempts to reach. It is a film that commits itself to its protagonist’s monstrosity.

It shocks and causes bile to rise at times at some of the antics of the monster.

From blackmailing a young girl into performing a sex act upon him, destroying his colleague’s reputation to ensure he gets a promotion, snorting copious amounts of cocaine, stealing money from his deluded friend – wonderfully played by Eddie Marsan – and making obscene phone calls to his same deluded friend’s wife and then seducing her at his home.

It appears that there is nothing that Detective Robinson will not do to further his own ends.

Black humour is abundant in the beginning of the film, with the many excellent supporting cast doing a fine job of keeping up with McAvoy.

It becomes very evident early on though that this is his film and it is all that everyone else can do to keep pace.

It is testament to his power as an actor that we are able to see a human side to his character as we watch the steady decline of his mental wellbeing erode before our very eyes.

He appears, at first, to have a detachment to the rest of humanity but this is soon revealed as a result of some insanity that he is losing considerable control over. He is, in fact, a very unstable man in terrible pain. A considerable amount of empathy is felt for the character – in spite of his despicable nature – before the film is done.

This is an excellent film and deserves the accolades that it will no doubt receive. It has a brilliant supporting cast and has touches of surreal brilliance here and there. The scene with David Soul – of seventies cop show Starsky and Hutch – doing a cameo singing one of his two hits from the same era is a strange addition, but a welcome lightness none the less.

The hallucinogenic scenes, with veteran character actor Jim Broadbent, are odd yet they do not feel forced or out of place in any way.

All in all this is a film well worth watching if only to experience McAvoy’s performance, and it deserves high praise indeed. It is not for the faint hearted or the squeamish as it definitely deserves its 18 rating but it will be well worth the ride should you have the stomach for it.