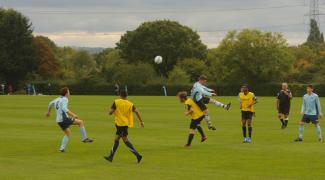 Charlie Marshall scored the only goal as Kingston firsts battled their way to a 1-0 friendly victory over local rivals Roehampton at Tolworth Court on Wednesday.

Neither side were able to retain possession or take control in a cagey first half, with John Sparrowford and Robbie Flynn going closest for the home team in the opening half-hour.

Marshall had the best chance of the first half though, volleying into the side-netting after some neat build up play from right-back Lorcan Reen.

The opening stages of the second half were dominated by Roehampton, who were denied by a last-ditch tackle from Robbie Flynn after the visitors’ attacker had rounded Kieran Sanderson in the Kingston goal.

As the half wore on, Kingston gained more of a foothold and in the 65th minute they broke the deadlock with Charlie Marshall poking the ball home after a swift counter-attack.

There was no let-up in Kingston’s pressure either, as they twice hit the woodwork in the final 15 minutes, including a powerful strike from club President Matt Stoten, who was also denied a late penalty claim.

Roehampton came close to equalising late on but goalkeeper Sanderson nullified the attack with a smart save and ensured that Kingston got one over on their rivals.

Progress to be made

Kingston captain Conor Billington was delighted with his team’s effort: “We were a bit rusty in a few areas and we don’t have our best side out yet but I thought we had a great game and everyone put their heart out today.”

Goal-scorer Marshall revealed he is relishing being the team’s playmaker: “I’ve played that role for five or six years so I feel pretty comfortable. It’s nice to get a goal too, which isn’t usually my forte as I’m used to distributing the ball, but it’s nice to get on the scoresheet.”

Kingston open their league campaign with a home fixture against Chichester fourths on October 16.