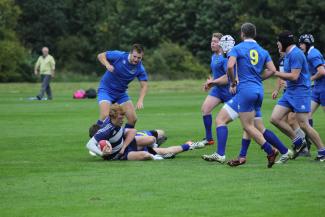 Kingston conceded a dramatic late try and had a man sent to the sin-bin as they drew 22-22 with Chichester seconds at Tolworth Court on Wednesday.

Kingston were leading 22-8 with 15 minutes left to play thanks to tries from backs trio Paddy Murphy, Josh Robinson and captain Dan Phoenix, but Dan White’s yellow card allowed the visitors back into the game.

The first half proved to be a scrappy affair with the only try coming from impressive full-back Paddy Williams and converted by inside centre Craig Felston.

Both defences then began to dominate with Felston narrowly missing a tricky penalty in the only other scoring opportunity of the half, giving Kingston a well-deserved 7-0 lead at half-time.

Chichester began the second half impressively, with their backs beginning to utilise the wind advantage and their asserted pressure led to a successful penalty from the visitor’s fly half in the 46thminute.

However, Kingston then stamped their authority on the game when powerful centre Josh Robinson picked up a sublime inside pass to finish off a flowing Kingston move, but Felston failed to add the extra two points.

Both teams then exchanged tries with Chichester replying through their captain and scrum-half Sam Davies, before Phoenix pounced on a loose ball to run under the posts, leaving Felston with a simple conversion to give the home side a 22-8 lead in the 66th minute.

White was then sin-binned for foul play and Chichester took full advantage as they scored a converted try in the 70thminute to set up a grandstand finish.

The 14 men of Kingston held out valiantly until the last play of the game, when Chichester broke through the exhausted home defence to score under the posts, leaving a simple conversion to break Kingston hearts.

Captain Phoenix said after the game:  “We got off to a good start and we looked strong getting our phases of play done but I think in the last twenty minutes our lack of match practice showed.”

“Ultimately going down to 14 men cost us but there are still plenty of positives to take from it. Tom Walsh and Paddy Murphy were impressive on their debuts and we will be confident going into our next game.”