This was the question posed to Clement Johnson, a third-year international relations student while he was looking for something different to do this summer.

Once in a lifetime

“I was going to go to France, but going to Iceland seemed like a once in a lifetime thing.” 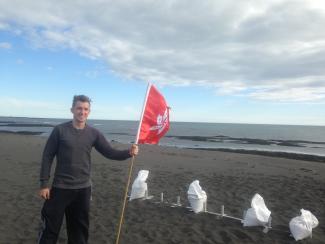 Johnson worked as a volunteer for RacingThePlanet, a Hong Kong-based company that has been organising endurance races around the world for over a decade.

TIME magazine has described their ‘4 Deserts’ challenge, in which competitors race across the Gobi, the Sahara, the Atacama and the Antarctic, as one of the top ten endurance races on the planet, alongside the Dakar Rally and the Tour de France.

In 2008, RacingThePlanet introduced a fifth challenge: a ‘roving’ race. It started in Vietnam and has since been to Namibia, Australia, Nepal and Jordan.

In August this year the roving race went to Iceland along with Clement and 60 other volunteers.

“Basically it’s a 250km foot race, a self-sufficient foot race over the Icelandic deserts,” Johnson said. “The competitors are self-funded and self-sufficient, so they bring all their food, clothing and sleeping bags and have to carry everything with them everyday.”

“We drove up to a glacier”

Johnson’s duties in Iceland were to put up the tents at the checkpoints each day and take them down when the competitors left in the morning. But, before the competitors arrived, disaster struck.

“We drove up to a glacier,” Clement said. “We had all the tents, the finishing line, the start line, the banners, the advertising. Then we practiced for a few days before the competition started: putting up tents, taking them down.

“The first night we set up the tents just for the volunteer team – the racers hadn’t arrived. We set up ten tents as a practice and slept in five of them and in the morning five tents were gone.

“The ones that didn’t have people in them were gone. Blown of the side of the mountain. It was hectic up there, really really windy. These are 30kg tents, just gone.”

“The volunteers make so much difference to the competitors”

Despite the initial hiccup, Clement said all the volunteers were experts by the end.

“The ten tents we set up on the first day took us three hours, but by the last day we were putting up 50 tents in an hour.

Samantha Fanshawe, vice-president of RacingThePlanet, said: “The race is really made by volunteers. When someone volunteers it means that they really do want to be there and that makes all the difference for the competitors.”

Teams from across 60 countries gathered in Reykjavik this August to compete, trekking across the stunning frozen terrain, glint with 20 hours of sunshine a day. Times were recorded each day and added together. The racer with the lowest total won.

But for some competitors, the competition didn’t matter.

“They drank wine and smoked cigars”

“One American team who wore Viking hats the entire time would always start fifteen minutes after everyone else, because they’d just be chilling,” Johnson said. “They’d smoke cigars at the end of each day and have a glass of wine.”

The self-sufficient aspect of the race meant that buying any food along the way would incur a time penalty, but this didn’t bother some of the competitors.

“The Vikings turned up with takeaway pizza on the last day and said ‘we’re last, you really think we care about a time penalty, look at this, this is pizza!’ Then they just sat down and ate it in front of everybody.

“They didn’t even finish last, even with the time penalties they didn’t come last.”

The eventual winner, Mo Faustok from Saudi Arabia, was so far in the lead going in to the final day that he ran the last 10km along side the second place competitor before dropping back and letting someone else have the glory of the finish line.

“Mo was the nicest guy ever. We spent most time with him because he finished first everyday.”

“It’s mad. There’s such different scenery. There’s sand deserts, volcanoes, glaciers, you can see the northern lights. Sometimes it was like being on the moon.

“Some days were really nice and clear, not a cloud in sight, quite hot, even. Then there were other days when it was raining and windy and miserable, and minus five degrees.

“I brought a sleeping bag than could apparently handle temperatures between minus 15 and plus 15 and it was not adequate. I froze my balls off. Slept in all my clothes all the time, couldn’t shower, just used wet wipes.

“Inspirational – it changed my life”

Clement told me that despite the uncomfortable living, the early mornings and the work, the attitude of the volunteers and competitors made it a hugely positive experience.

“The competitors were really inspirational. Some of them were CEOs, business people, you expect those people to be really fat and not look after themselves but they’re not like that. They do 14-hour-days in their offices and then go to the gym for two hours to prepare for this race.”

“It changed my life,” Clement told me. “Seeing all the people cross the finish line was amazing, especially the teams because they had to run together.

“A guy from the Chinese team severely wrecked his ankle, so for the last 10km, his team mates carried him. They carried him ten kilometres. There were tears of joy and accomplishment. Everybody was clapping and going crazy at the finish line.

“The sense of accomplishment on people’s faces was insane. I really want to compete.”

While this year’s roving challenge had the competitors trekking across freezing glaciers, next year’s will send them to the swealtering African island of Madagascar.

RacingThePlanet have described the Madagascan terrain on their website: “The unique landscape includes lush rainforest, sheer rock cliffs, desert and savannah all surrounded by thousands of kilometres of pristine, turquoise shore line.”

“I’d reccomend it to anyone,” Clement told me. So if you’re looking for something a bit different next summer, visit 4deserts.com and apply.