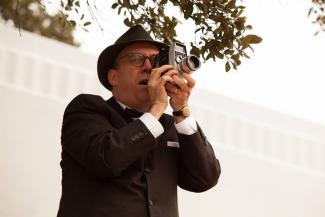 The film, which follows the lives of bodyguards, bystanders and hospital staff, is set on the day of Kennedy’s death (November 22, 1963) and the immediate few days after.

Taking its title from the Parkland Hospital in Dallas, Texas, where both President Kennedy and his assassin Lee Harvey Oswald died, the film’s focus is refreshing. By not putting the emphasis on Jackie Kennedy in the aftermath of her husband’s death, Landesman breaks the cliché of Kennedy films that have preceded it.

This is seen most when two of the main characters, Jackie Kennedy and President Lyndon Johnson, head back to Washington DC and the film remains in Texas.

It is clear that a lot of energy has been put into recreating the events around the assassination. The chaotic scene where Kennedy is rushed into hospital after being shot while Jackie Kennedy sobs nearby is believable and the interweaving of real news footage from the time is effective. But, the film would be greatly improved if more focus was put on the character narration.

As a result of their limited screen time, the majority of characters in the diverse all-star ensemble are forgettable, however good their performances are.

Paul Giamatti plays Abraham Zapruder, who captured the assassination on film and as a result has both government agents and press fighting over his footage, is one of the characters who you see more of. He gives a good performance as a tormented tailor who wishes he had never got his camera out in the first place.

Landersman also gives a lot of screen time (compared to the other characters) to Oswald’s brother, Robert Oswald.

James Badge Dale gives a thoughtful performance as Lee’s brother, trying to cope with his sibling’s actions and deal with his mother, who remains convinced that her son was a government agent who has been framed.

The Oswald family scenes are another refreshing factor to the film as they give a different angle to events.

Landesman’s first attempt at directing should not go unrecognised or un-praised. He has taken a very difficult point in American history, a story that has been created in film so many times and told it in a completely different way. He has given those who directly dealt with the aftermath of the assassination a voice. There is however, no denying the fact that this is still only a mediocre film at best.