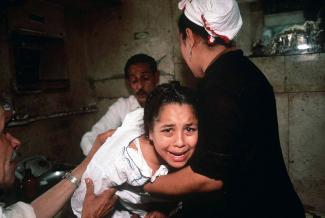 When Alma* tries to make sense of the jumbled chaos of feelings she is left with after fleeing a country in turmoil, all she can remember are her own screams.

The then 16-year-old Somali was one of many who left a war-torn country in the hopes of finding a better life in the UK. But eight years later, and countless miles away from the people her memories recall, the cut is still clear as a razor blade.

As a little girl, Alma was brutally held down by a group of older women who were sent to perform the inevitable. She, like the majority of girls in her community, was to be circumcised.

“My cousins went in before me, and oh my God, all I remember are their cries,” she recalls.

“It scared me so much because I knew that was going to happen to me next. The minute I saw the razor blade, I started screaming.”

What came next remains clear in detail to Alma. The smell of blood, the dirty, muddy floor, and her hopeless fight to get loose are all memories she will never be able to forget. And then there were the screams. Her screams that no one heard.

“Ten women cut me up and then sewed me back together, just leaving a little space for me to urinate. It is still all in my head, and I even remember the sound it made when they cut into me,” Alma says.

Alma remembers how she dropped in and out of consciousness while the women executed the circumcision. Before she knew what was going on, she was lying in a pool of her own blood.

Growing up in a rural village, basic medical equipment was insufficient and the female cutters, known as herbal doctors, used thorns from cactus plants to stitch the nine-year-old back up.

Alma’s cut happened in Somalia, but there are 24,000 girls under 15 living in danger of becoming victims of female genital mutilation in Britain today, according to a new report from the UK Royal College of Midwifery, Nursing, Obstetricians and Gynaecologists (RCOG).

Failed by the system

The report, Tackling Female Genital Mutilation in the UK, warns that thousands of British girls, like Alma, are being failed by the health and justice system.

Although the practice has been defined as a crime by UK law since 1985, no one has yet been prosecuted. Looking at France, with more than 100 imprisonments and the highest number of FGM convictions in Europe, Britain still has a long way to go.

Years have passed since Alma, now 24 and a KU student, moved to London. Behind her veil of black clothing she speaks so easily. Her problems are overcome by a chatty warmth, and at times it is easy to forget the appalling abuse that she has suffered.

Instead of being able to enjoy student life, Alma has had to wrestle with health problems for years. The issues involve menstruation difficulties and various infections, problems that left her hospitalised for most of last year. Because of this, she is now re-taking her second year.

Lucy Walker, the executive assistant at Orchid Project, a charity fighting to end FGM, said that experiencing medical problems due to circumcision is not uncommon, but that there are also countless quieter ordeals that never show up on the medical chart.

“Girls who undergo FGM go on to experience lower self-esteem, more anxiety and personality disorder than uncut girls their age, as well as symptoms of depression,” Walker says.

What Alma finds hardest when it comes to living with FGM is the sense of being different to other girls. Uncomfortably, she describes her struggle to connect with herself, and a feeling of being two persons trapped in one damaged body.

Emotions overwhelm her and Alma starts crying. With a voice I can barely hear she says: “I would love to have kids and get married, but physically and emotionally, I am not ready.

She gazes around to make sure no one is listening, before adding: “Even when I shower, I can’t look down there. I can’t face it and it is such a horrible feeling to not be able to look at yourself.”

Because of migration, UNICEF reckons that the three million girls who undergo FGM every year are circumcised not only in Africa, but on an increasingly global scale.

Activist and campaigner Leila Hussain described Britain as a “soft touch” in the fight against FGM. On The Cruel Cut, a Channel 4 documentary that aired last week, Hussain said that communities in Europe that practise FGM will bring their daughters over to the UK to get the cut done here.

Alma believes that because female circumcision is seen as a “cultural thing”, the west is hesitating to interfere.

“In all honesty, if I was a white woman, the world would have done something a long time ago and it already would have been in the media and in parliament,” she says. “People in England don’t want to be racist, so they hesitate from getting involved.

She sits back in her chair, clearly in deep thoughts, before saying to me: “You know what, it could have been you who was born in Somalia and had this done to you.”

Alma is now focused on her studies, and hopes to one day work for the UN refugee agency (UNHCR).  Another hope is that the pains from the FGM will go away, and that the UK will start seeing female circumcision as a problem at home as well as abroad.

“In my religion, there is a saying that reads ‘help one person, and help the whole of humanity’. The only difference between us is that I am black, and you are white. We have the same feelings, and that is all that matters.”