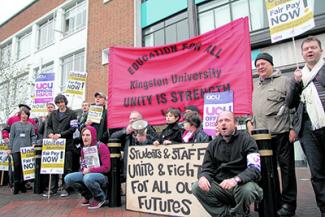 KU students face a day of chaos as hundreds of lecturers and administrators walk out for a second day’s strike on December 3.

University staff who are union members have also refused to rule out the possibility of another strike before Christmas as the dispute over pay continues.

Simon Choat, the membership secretary of KU’s University and College Union (UCU) branch, said: “We know it’s an inconvenience when classes are cancelled but in the long term we think this action is in the students’ interest.

“It’s not in the students’ interest to have under paid and demotivated staff.

“There is a time limit from when the ballot takes place as to when you can hold a strike, but there is a possibility there will be a third strike before Christmas.”

The nationwide strike, supported by four unions across the higher education sector, is due to the one per cent pay rise offered to university staff – which the unions argue is a pay cut in real terms.

“We want them to stop cutting our pay and give us a pay rise to match at least inflation. So until they do that, our one way of persuading them is to go on strike,” Dr Choat added.

KU students also face the prospect of major delays in getting their work marked back after Christmas.

After the first strike on October 31 failed to achieve a pay rise, many UCU members have taken action short of a strike by working to rule.

Working to rule means university staff will not work or conduct any duties that fall outside of their contracted hours.

Julian Wells, chairman of KU’s UCU branch and senior lecturer in economics, said:  “If we’re still working to contract when the assessments start coming in and people find that they don’t have enough time to do their marking and other duties within their hours, then we will be saying to management, what do you want us to not do?

“The management will be responsible if the work isn’t marked.”

National negotiations held between Unison, Unite, UCU, the Education Institute of Scotland (EIS) and the Universities and Colleges Employers Association (UCEA), which represents universities as employers, failed to reach an agreement on Wednesday night.

The unions claim there has been a 13 per cent pay cut in real terms since October 2008 because university staff’s pay has continuously failed to match inflation.

The UCU branch at Kingston has nearly 500 members and the committee are hoping non-union members will also join them on the picket lines.

Kingston lecturers and administrators hope management can propose a fair settlement soon, but in the meantime said it was up the students to decide what they do on the day.

“We are asking students to support us. A lot of lecturers supported student action over the rise in tuition fees, so we’re expecting solidarity with lecturers and students on December 3,” Dr Choat said.

The UCU branch at Kingston sent a letter to KUSU asking the students’ union to support the boycotting of any teaching and learning activities that may be taking place on December 3.

KUSU have stated that they support the strike action in principle and recognise the importance of well-paid staff to deliver a better quality of teaching.

Emma Shakir, KUSU’s VP of learning and teaching, said:  “We are requesting that the University guarantees that any students affected by the strike in terms of lost teaching time will be compensated academically by having those missed lectures rearranged.

“Current students should not be disadvantaged by any disagreement between the University and lecturers.”

Francesca Manning, 24, a third-year student and member of the Socialist Worker student society, said: “The students’ union must do more to support the industrial action taken by workers at our University.

“Students will not benefit from underpaid, overworked lecturers and our union should recognise this.”

Lucy Battrick, a third-year sociology student, said: “Lecturers can strike as they may, but under no circumstances should it interrupt with my tuition or studies, for which pay I a handsome sum.”

Kingston University said they fully recognise the legal right of the unions’ members to support the call for industrial action.

A Kingston University spokesman said: “The University is unable to predict how many staff will take industrial action since union members do not have to inform their employers in advance.

"We are grateful that during past industrial action academic staff have, in the main, rearranged lectures and tutorials to ensure their students were unaffected by the action.”