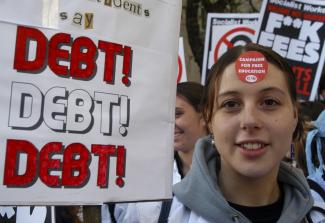 The Government sold off more than £800m of student loans last Monday to a private debt management consortium and there are plans to privatise the current loans as well.

The mortgage style loans which were taken out between 1990 and 1998 were sold at a fraction of the price – £160m- because the Government saw no way of ever getting it back.

“The mortgage style loan book, although it has a face value of £800m, a large percentage of that is bad debt so there is no hope of ever getting that back.

“We consider that we got very good value for money with the sale of this because a lot of the debt is past ever being able to collect, so there is no value for keeping it on the tax-payers, books,” said a Government spokeswoman.

Although plans to sell off the current loans have not been finalised as yet, it is being considered as an option.

“We are only just looking at the feasibility of whether we can actually sell them. The reassurance we can offer students is that their terms and conditions won’t change,” said the spokeswoman.

This is something that the Student Assembly Against Austerity (SAAA), who organised a day of protest against the privatisation on November 20, are sceptical about.

The SAAA plan a further week of action for early next year.

“I think we made a really good start on the 20th of November and what that day basically did was sound the alarm that this is what the government is trying to do. We’ve now called a national week of action for the 3rd to the 7th of February,” said the spokesperson for SAAA.