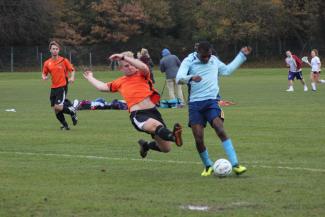 Kingston firsts failed to secure a point on Wednesday despite coming from two goals behind at Chichester.

A pair of lucky goals had Chichester fourths 2-0 up before half time, but slick passing from the Cougars’ midfield meant the visitors looked the more likely to take the points going in to the last 20 minutes.

But a glancing header at the near post snatched victory for the south-coast side five minutes from time.

Conor Billington described the match as a “top of the league fight” before the game, adding: “This is one we should win.”

Despite starting with a squad ravaged by injuries, the Cougars still managed to dominate the early part of the game with shots from Charlie Marshall and Ebrima Bojang signalling Kingston’s intent.

Chichester’s long balls caused little problem for Robbie Flynn and Chiwanga B’Wyale at the back, who were solid throughout.

But the deadlock was broken in bizarre fashion on 17 minutes when a huge kick from Chichester ‘keeper, Dan Roberts, bounced over Kingston’s Simon Zeigler and in.

Kingston responded well when Kaveh Rashti smashed the ball against the bar but Chichester doubled their lead seven minutes later when a scuffed cross from the right wing evaded Zeigler and Flynn in the box. Billy Elliot tucked away the simplest of chances.

Kingston again responded positively and their hard work finally paid off when right-back Lorcan Reen played a perfect ball into Bojang, who spun his marker and coolly slotted the ball home.

With the score at 2-1, a Kingston comeback looked inevitable.

Indeed, the equaliser came 20 minutes from time when Bojang held the ball up with his back to goal before slipping it through for Mursal Mohammed to knock past the oncoming ‘keeper.

Either side could have taken the points in the final 15 minutes with good saves and near misses from both teams. But Simon Jones made sure it was Chichester who would finish victorious, glancing in a header at the near post five minutes from time.

“I think it showed a lot about our character that we didn’t let our heads drop,” Reen said after the game. “I’m disappointed to lose, but I’m incredibly proud of the boys. We played well and deserved more.”