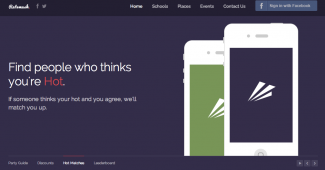 Students feel “betrayed” and shocked after a website uploaded their photos onto “hot or not” boards without their consent.

Ratemash.com has uploaded around 150,000 Facebook profile pictures of students from more than 100 UK universities, asking its users to rate them based on attractiveness.

“I had no idea that my picture was on that website. I’ve never come across it before and don’t even know how it works,” said one Kingston student, who wishes to remain anonymous.

“I feel completely betrayed to know my picture got on that website without my permission. I’m just in shock as to how it’s gone up.”

Ratemash organises each university into two “leaderboards”, one for male and one for female students. The pictures in the top 50 link directly to students’ Facebook accounts.

KUSU’s women’s officer Elaha Walizadeh called the website “morally and ethically wrong”. She said student representatives across the country had tried to contact Ratemash to no avail.

“They seem to be pretty shameless,” she said. "I think we need a joint movement against it."

Walizadeh advised students who found themselves on the site against their will to remove their profile pictures and change their privacy settings until the issue was resolved.

Michael Healy, who runs Ratemash, said last week that they were in the process of removing people whose pictures were "wrongly" uploaded.

“People are invited or nominated onto the website by their friends,” he told the Huffington Post. “We are actively removing people who were wrongly added to Ratemash.”

“It freaks me out," she said. "Why on earth does this site feel they have the privilege to access my private pictures?”

But not only current Kingston students are affected. Among those featured on the site is former English literature and creative writing student Rosie Smith, 21, who graduated last summer.

“I’m shocked and a little creeped out that they’ve just stolen random people’s profile pictures to put on there,” she said.

“I thought it would’ve required by consent to take my information and put it on a completely different website,” he said.

Facebook, which began after Mark Zuckerberg founded a “hot or not” site called Facemash, told the Huffington Post last week that it was investigating Ratemash.

Ratemash has been contacted for comment but has yet to respond.