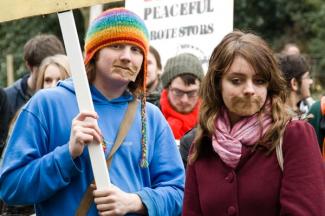 KU students are standing up for freedom of speech on campus after higher education leaders warned that it is not an ‘absolute’ on campus.

The new guidelines followed a number of claims that extremist speakers were using campuses to radicalise young people.

Alistair Brown, a KU politics and history student, said: “Any step trying to limit freedom of speech is backwards and barbaric, and fights the very principles that allow them to have that opinion in the first place.”

The document, produced by Universities UK – the umbrella body representing vice-chancellors, reads: “A number of criminal offences can be committed in spoken words, typically involving threats of violence or certain categories of ‘hate crime’.

“Universities have to balance their obligation to secure free speech with their duties to ensure that the law is observed.”

Student Rights, a pro-equality group, said that preachers it describes as radical Islamists spoke at 180 events at 60 universities in the year up to March 2013.

Rupert Sutton, a researcher at Student Rights, said: “I have certainly seen students contact me about these events more often this year, suggesting that they are becoming more aware of the issue.

“Whilst universities do have a legal duty to protect freedom of speech they also have to be aware of the risks that speakers may break these laws.

“However, this doesn’t mean that speakers should be banned from campuses, just that universities should be aware of the risks posed,” he added.

Elizabeth Carse, KUSU VP life, said that she believed that freedom of speech was a university right.

“We try to encourage free speech wherever we can, but enforce a rigorous screening process in partnership with the University for every speaker that comes onto campus.

“If the speaker is deemed to be high-risk, as has happened in recent cases, then members of staff from both the Union and University attend the event with security also on hand.”

A university spokesman said: “The University and Students Union’ have a joint, rigorous policy with regards to approval of external speakers for society events.

“Kingston University has more than 23,000 students, encompassing a wide range of political and religious views and beliefs and as centres of learning and education, universities and student unions do have an obligation to protect freedom of speech, within the law, and to stimulate academic debate.”