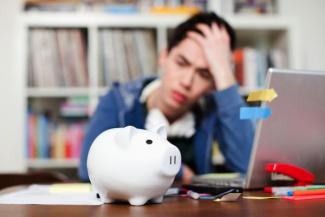 It is common knowledge that living in London does not come cheap, and it is no different for students. According to the National Union of Students, the average living cost for a student living in London is £13,388. Kingston University students are no exception and with tuition fees rising, it is no surprise that many students are feeling the pressure mounting.

According to a recent report by The Telegraph, students who started university last year will on average graduate with £40,000–£50,000 worth of debt, which is likely to have a big impact on family finances and could crush dreams of getting on the property ladder.

A spokesperson for the National Union of Students said: “Although student loans are available for fees and maintenance, these have not kept pace with rising living costs, nor have the thresholds at which families get support.

"As rent, bills and other outgoings continue to rise year after year above the rate of inflation, the level at which students get maximum support has remained at a household income of £25,000 since 2008, whilst grants and loan rates were frozen this year and will only rise by 1 per cent next year."

Cheryl Lovett, a third-year psychology student said: “I have two jobs; as a bar supervisor at Hippodrome and student ambassador at Kingston University. I took on student ambassador first to pay the bills. I wasn't getting enough income from this so applied at the Hippodrome.

“In my second year my mark was 58 per cent and I blame that on the fact I had two jobs, I worked every night that Hippodrome was open and took on every ambassador job going. I got 40 per cent exactly in two of my modules”.

Cheryl is not alone in struggling to balance her job and her studies.  Joseph Harris started working in his first year at Kingston after having troubles paying his rent in Clayhill halls.

“I have managed to keep up with everything so far, but that will most likely change soon and I will have to leave work or it will negatively affect my studies,” said Joseph, a third-year history and international relations student.

However his studies have not been the only things that have suffered due to his work schedule.

“I do not get to go to Union Mondays. Jokes aside I still have a somewhat active social life but some days I am noticeably tired and I often spend weekends in the library to keep up.”

Toni Pearce, National Union of Students (NUS) President said: “Many students at university are facing a cost of living crisis. Those who do not have the rare luxury of resorting to the ‘bank of mum and dad’ are increasingly being driven to work full-time alongside study where jobs can be found, or worse still into the arms of predatory pay day lenders just to make ends meet”.

International students may have an even harder time funding their studies; EU students do not qualify for any English grants or maintenance loans.

Sasha Vouthouni is a third-year English literature student from Greece. Due to the difficult financial situation in her country, her parents were no longer able to fund her degree. She has started working at TGI Fridays in order to afford to stay in England.

She said: “There should be funding for students whose parents cannot pay for everything. I believe that when you are a university student your job is to study and get your degree. A student should work if she wants, not because she must in order to pay for rent, and bills."

Many believe that there should be more help available to those students who fall in between the financial brackets.

Elizabeth Carse, Vice President Student Life at Kingston University Student Union said: “I think that an optional larger loan should be available as the student will be taking on debt themselves to eventually pay off when they can.

“I do think that exceptional circumstances should be taken into consideration, but it is easy to see how complicated and time-consuming it would be to look at every student on a case-by-case basis.