A Kingston student who has raised £500 in three days for an animal documentary, said she was overwhelmed by the support, but is still looking to raise more.

Three days after publishing a short video explaining her final year media project online, Påskesen reached her goal of raising £500, but is now looking to extend her project.

“I think my stretch goal will be £800-£900 so that I can get a longer interview and come ‘behind the scenes’ at London zoo,” said Påskesen.

The 23-year-old decided to raise the money she needs in 30 days, but received £300 worth of donations on the first day.

“Other students, friends and family have been really supportive and I even got a £250 donation from an anonymous MP, who did not want me say who he was.”

Påskesen, who grew up on a farm in Denmark, said that she has always been passionate about animals and wants to work with animal conservation.

“I was never really good with science at school, so I thought why not go the creative way and see if I can help animals by making a video?

“I want to make a change, but it’s hard on a student budget,” she added. “That’s why I am asking for help so that I can pay entrance, interview fees and transportation.” 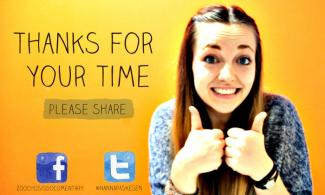