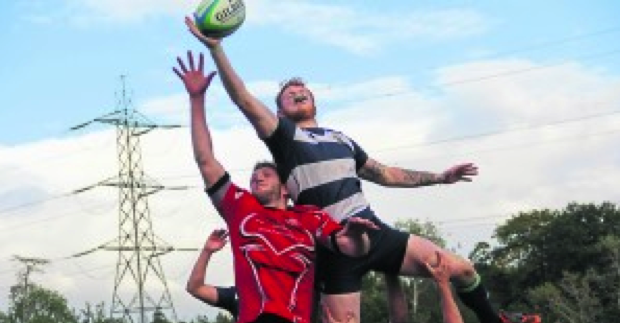 Super captain, Lewis Tucker, led Kingston men’s first team to a 78-0 rout against Reading university, despite breaking his nose at the game which took place Wednesday afternoon at Tolworth Court.

It only took Kingston ten minutes to hit their stride after captain Lewis Tucker picked up from where he left off last season and opened the scoring with a strong run through the Reading defence. Dan Wilkenson converted the textbook try with a fine conversion.

Kingston capitalised on Reading’s sloppy handling of the ball and continued to pile pressure on Reading’s defence, resulting in two tries and two conversions in the space of 20 minutes.

Lewis Tucker said: “We started the season as we planned. We didn’t concede any tries, which is a statement to the league. Considering it was 78-0, we did well to keep our discipline and on the whole we did well as a team.”

Kingston ended the first half with another simple try which Dan Wilkenson scored and converted.

Reading showed further frailties early in the second half and gifted Kingston with another try after a schoolboy error, which allowed Ben Brown to score his second try of the game, after he took advantage and glided through a gap left by the Reading backline.

Lawrence Jackson proved his worth and scored a try from a strong Kingston scrum, which was then converted by Dan Wilkenson, making the score 48-0.

Captain Lewis Tucker felt the full force of a Reading hand and ended the first half with a broken nose. However, after he put it back into place he began the second half where he left off in the first half and scored a brilliant try after a lovely move which was instigated by a delightful dummy pass from Kingston’s number seven, Noah Abrey.

Poor handling continued to take a toll on Reading’s ambitions to get back into the game and Ben Brown capitalised with another brilliant try and swept Kingston clear.

The last quarter of the second half saw Kingston run riot and Ben Brown got his fourth try of the game, increasing Kingston’s lead.

The rout was completed by a try from Navid Irani and ended with a ninth conversion for Dan Wilkenson.

Dan Wilkenson said: “I thought the game was good fun. I striked my conversions sweetly and everybody played well.”

Reading’s captain, Callum Moore said: “We had a very new team full of freshers so it was bit disjointed. We have a lot to work on and we’ll come back with a different attitude.”