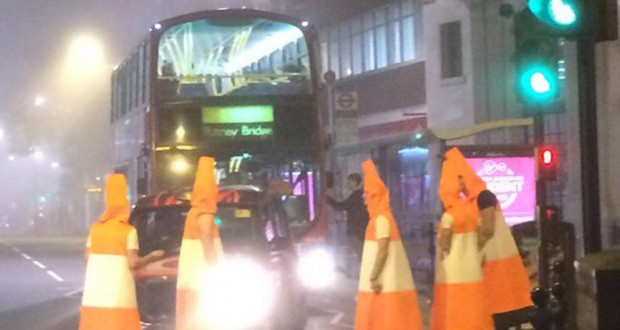 Written by Harriet King on November 3 2015

Kingston police received an amusing phone call Saturday night after a group of males dressed as traffic cones blocked Uber taxis from driving down roads in the town centre. 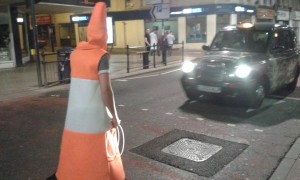 The group of five males were encouraged by a drunken crowd shouting ‘fuck Uber!’ and ‘save the black cabs!’

Dean Robinson, 21, now known as one of the ‘Cone men’, said: “It never started as a protest. It was just for a laugh but a few people joined in and eventually it turned into a protest against Uber. We were letting black cabs through and blocking Uber drivers.

“We don’t have a personal problem with Uber, we just went with the people to please the crowd.  It was a drunken crowd – we were just standing there being cones for most of the time while some other people took it too far. We were just having a laugh – even the drivers were laughing and the police asked to have a photo with us.” 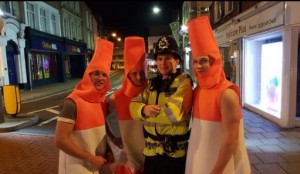 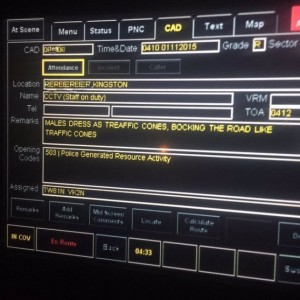 Kingston police tweeted a picture of the group on the night and described the incident as ‘very interesting’.

A spokesperson for the Kingston police told BuzzFeed news: “We are human beings and we do find things amusing. Obviously, they were standing in the middle of the road and there’s a dangerous side to it.”

Third year KU student, Francesca Metcalfe, was leaving work when she saw the real-life traffic cones and stopped to take some pictures.

She said: “When I saw them I burst out laughing and told them it was the best thing I’ve ever seen. It was hilarious – you could see them from ages away and hear all the car horns beeping.”