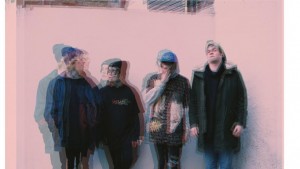 Written by Ashwin Bhandari on November 5 2015

Formed at their local sixth form college in 2012, indie three-piece Jaws have gone on to grace Bestival and South By South West stages, and supported their musical contemporaries Swim Deep and Peace on various tours. Drummer Eddy Geach, guitarist Alex Hudson and lead vocalist and guitarist Connor Shofield all agree that the unexpected success is somewhat surreal.

“Looking back on it all now, I think we do tend to forget that we’ve done all of this stuff and we’re very lucky to be in this position,” said Eddy. Connor agreed, adding: “The way I see it is, I was at college with a bunch of kids who were way better at guitar than me, way better at drums than me, way better singers than me, and now I’m the one doing all these cool things and you can’t really take that for granted can you?”

As musicians they’re influenced by very different things. For Connor it’s the people around him at home and the unique scene they are a part of in Digbeth.  For Eddy it’s watching documentaries of big bands like Kiss, Black Sabbath and Foo Fighters, as he is interested in how they all ultimately achieved their respective successes. For Alex however, it’s simply just the thrill of hearing a song before going to sleep and dreaming of being able to play live.

“A lot of the time when I go to pubs back home, my Dad’s mates always ask me ‘so what kind of music does your band sound like?’ Obviously they aren’t up to speed with all the hip indie bands out there so I just say The Cure or The Smiths just to make things easier,” said Eddy.

“One thing I always say when we’re writing a song together is we don’t make ourselves try to sound like a certain band, it all just sort of comes naturally, rather than being like ‘you know what lads, let’s do a song like The Smiths because they’re so cool’,” added Connor.

Of course, even though they aren’t the biggest band in the world for their scene, they haven’t been without their peculiar fan experiences. In Leeds there was a man who came on stage to brush his teeth, and last time they played Kingston, a fan air drummed with chopsticks for the entire set.

“The worst is when they’re very full on and ask ‘do you remember me?’ and when you can’t quite remember it becomes incredibly awkward. We’re very lucky to meet so many people but unfortunately they just slip through the sieve,” said Alex.

Connor believes that the album Be Slowly was somewhat rushed, and they had no choice but to learn the songs in the set as they played them live. However, this time around they are making sure that everything sounds as tight and expansive as possible. The riff for the new single What We Haven’t Got Yet simply “came to him” rather than trying to imitate a particular style this time, and he admits that previous songs had been written with the intention of just playing shows.

“We made sure everything was tight live and in practice beforehand because we’re secretly sick of the old songs. We wrote so many new songs for this album that it wasn’t hard for us to pick out our favourites. There are 10 tracks on there, and it’s the best stuff we’ve ever recorded.”

Jaws will be on tour in the UK from November 20 until December 16. You can buy tickets now from their official Facebook page at: