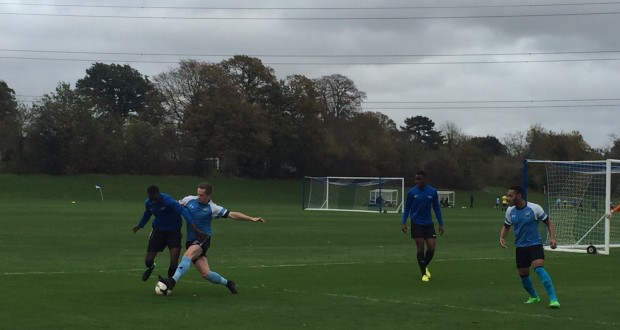 Written by Leigh Boobyer on November 21 2015

Kingston’s first team had a very disappointing league defeat at their home grounds in Tolworth on Wednesday, against University of Roehampton’s first team.

The boys faced a 7-1 defeat, which was a very shocking result for them and ruined their chances of being top of the league.

Josh Wright who was subbed off in the match during the second half said: “You just expect more don’t you?”

The match had kicked off at a fast pace and showed equal effort from both sides. Roehampton scored the first goal of the match but the Cougars managed to equalise after 5 minutes.

Unfortunately, the Cougars lost all motivation after the second goal was scored. Kingston made many clumsy mistakes which led Roehampton to victory.

“At 1-1 we had many opportunities but we didn’t really take our chance and they did, our heads just dropped towards the end,” Cougars captain, Gareth Chendlik said.

The gruelling match was cancelled five minutes early due to heavy rain which was relieving for the Cougars; they could not face any more goals from the opposition.

This was an important match for the Cougars, this match decided who would be at the top of the league. At this point Roehampton are in first position and Kingston in second.

Chendlik said: “A week ago I said to the boys before our cup game that this week will define our season.”

Wright said: “I think we lacked a bit of chemistry today, we couldn’t get the ball down.”

The game was described as very “sickening” by all the Kingston players, Roehampton scored three goals in the space of five minutes.

Chendlik said: “I don’t think I’ve ever lost 7-1 before, every year I’ve played for the Cougars we’ve made Tolworth a fortress.”

The Cougars captain was still trying to score something before the full time whistle went. He had an opportunity at the 81st minute where he went through the wing.

Kingston has a week off from playing which gives them the chance to reflect on what mistakes they made against Roehampton. Their next game will be on 2 December against University of Chichester men’s fifth team.