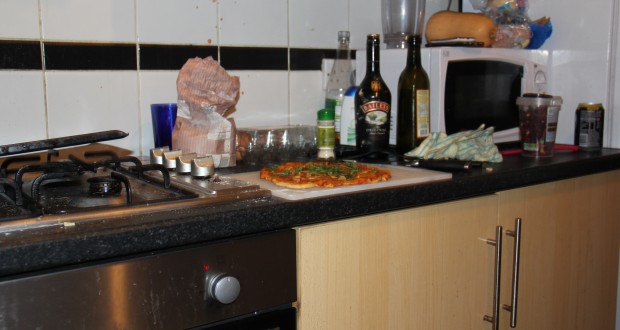 Chef Sam is put to test in the first episode of a cooking series. Picture: Sam Jarrett

Last night I was offered an invitation to go to a luxurious dinner party at a mansion close to Penrhyn Road. The menu was secretive and all I knew was that a Portuguese dish would be included.

I went straight from work to find Chef Sam in the kitchen, dirty blue hoodie on, using it as an apron, I suspect. I actually thought I would arrive to a procession of meals on the table, just waiting for me. It turns out I had to teach him how to make dinner. It consisted of fish, which I don’t even eat, and neither does he, because we are vegetarians.

Disappointment arose, but I trusted Chef Sam and I had faith that we would accomplish our feast. I started giving him the directions to a meal that I knew all too well from my times of meaty indulgence. Chef Sam did not like it. He asked if I wanted to take over. I said no, I am sorry. From now on I will just look.

I was named sous chef and I proceeded to peel and chop potatoes. I told Chef Sam that the fish needed to be cooked in half a kilo of salt. Which he did, even though I was exaggerating. I realised I should not bring my sarcasm into the kitchen. 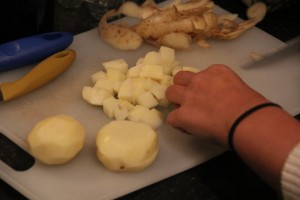 While the cod cooked, we sautéed the potatoes in oil and began to fry the onions and garlic. He then flaked the cod and added it to the onions, followed by the fried potatoes. He mixed everything up while I looked over his shoulder and questioned if he had ever done his own béchamel sauce. He rolled his eyes.

We used some double cream to bring everything together and I assisted Chef Sam with the béchamel sauce. I added the butter, flour and milk at his request. He just stirred it, showing off some kind of move he had learnt at the ‘restaurant’ where he worked. Not impressive.

By this time, our guest, who was going to actually eat the food, was already drooling over the pan. Chef Sam insisted on adding dill – something I thought was revolting and I am pretty sure my mother would think so to. I had eaten this food for years and it was one of the first things I learnt how to cook. Now this English person, who had no clue how our love for salted cured cod is bigger than life, was telling me how to cook it. I was just a sous chef, so I closed my eyes and blindly agreed to it. 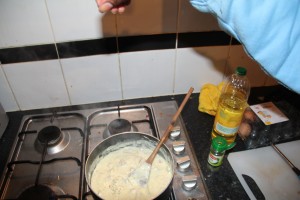 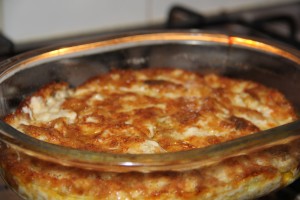 The last step was to pop it in the oven and let it broil. An hour and a half had passed and I was already convinced our dinner would be a bowl of noodles, but I patiently waited. The Chef looked at the flour bag and looked thoughtful for a moment.

And then magic began. He quickly mixed it with olive oil, water, salt, paprika and all sort of spices and kneaded the dough for a while. Without me even realising, Chef Sam had made a tomato sauce which actually smelled pretty glorious. I backed off and watched him as he sliced onions and broke off bits of mozzarella.

Using a Bailey’s bottle as a rolling pin, he spread the dough into a flatbread shape, added the tomato sauce on top, gracefully dropping a few onion rings and chilli flakes on it. Even though Chef Sam is the proud owner of lady fingers, he refused to try and move the flatbread to the baking tray (it was glued to the chopping board).

He decided to hide away whilst I and another one of his apprentices took on this hard task. We managed to make it look fairly good. The fish pie had already been eaten and we were all just staring at the oven at this point. Then Chef Sam added a few rocket leaves at the last minute which made it look even fancier. 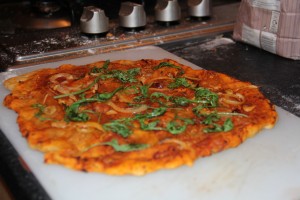 When he pulled it out of the oven we all had a taste. It was very, very good. Even Chef Sam wanted to make more. I liked the fact that he respected my dislike for incredibly spicy food, although I have the feeling I ate the bit with all the chili in it. I promised I would clean the kitchen and I left without doing so, but at least I faced the cold rain with a hot mouth (and a warm heart).