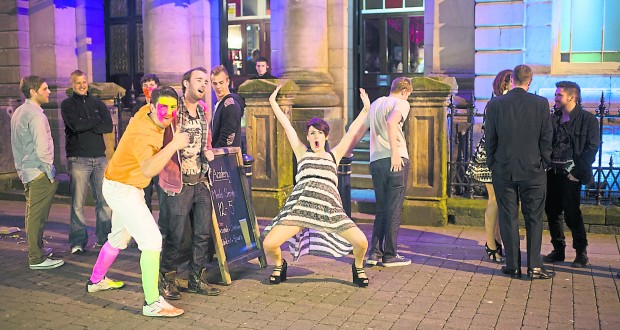 The night scene in Kingston is becoming so strict that people rather party in the streets. Photo: REX Features

Bring on the house parties, I refuse to go out in Kingston’s night clubs

I HAVE refused to go out to night clubs in Kingston for the past couple of years and to this day I am still happy about my decision.

A range of measures have been implemented/proposed lately which mostly made me doubt about the success of certain venues in the area. We, as university students, are adults capable of making our own decisions. Yet, in the Kingston night scene, we end up treated as children.

Bacchus, Viper Rooms and the University’s Space Bar have announced they will keep on using breathalysers after a “successful trial” proposed by the Metropolitan Police.

Viper Rooms security will also look after people they think are too drunk by taking them to the chill out room, offering toast and tea (the infamous ‘toast rehab’) – but only letting people go once they decide they are sobered up.

Kingston night clubs also have fairly strict door policies in which they all operate with computers where people’s IDs get registered. When someone is kicked out of a place, the system in that specific night club will then send notifications out to other clubs, which means that when someone is banned from a venue, they will be banned from every single club in Kingston.

Apart from all these facts, a new proposal has been debated in council regarding the closing time of night clubs. If this goes ahead, clubs may close even earlier than 2am. Great, we all love a house party anyway, why bother go to night clubs at all?

The idea that breathalysers will help keep drunken people from bringing a bad atmosphere inside the place is not even that fair. Usually bouncers do not need a machine to know when someone is too intoxicated – which will inevitably happen in a night out and does not necessarily mean that person should be kicked out. That will only create resentment instead of trust towards the venues.

The argument is that people have been causing havoc in public streets after leaving the clubs, which the council is quite keen on preventing.

But creating an atmosphere where locals rather not go to the venues or kicking people out will do exactly the opposite – it will push the problem out into the streets. People will drink, they will break stuff and they will pee on the streets because that is actually the most fun they can have in here. So how ‘successful’ are these measures?

Going out in Kingston is a pain. Having a few drinks and going for a dance should mean that you get to release all of the accumulated stress from the week, not the opposite.

From now on, I will only walk into Hippodrome on Thursday nights to attend New Slang events. But I will be careful not to giggle too hard at the door or I might end up eating toast with the bouncers while listening to the concert from the room next door.