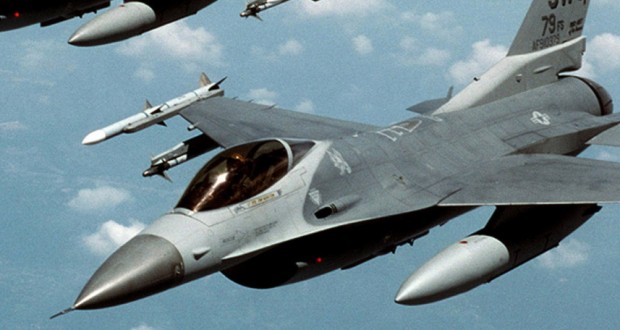 Drones are launched during air strikes

Why we should all support UK airstrikes in Syria

Written by Claire Gilbody-Dickerson on December 2 2015

Labour MP Jeremy Corbyn warned MPs that they would be “killing babies” if they backed the motion put forth by Prime Minister David Cameron to bomb the Islamic State in Syria, where the jihadist terror group’s headquarter is currently based. But how many more babies would be killed if nothing were done to halt the expansion of these extremist militants? How many more cities around the world will be struck by the terrorists’ obscene violence?

Thousands rallied in central London last night to protest against the UK’s intervention in Syria, chanting “Don’t bomb Syria!” and “David Cameron shame on you!”

Lindsey German, the convener of UK anti-war organisation Stop the War, told the crowd: “We are here to say one very simple thing: don’t bomb Syria.

“Do not this time go and bomb a country where you make it even worse than it was before.”

German’s words go to show that anti-war protestors disapprove of Cameron’s proposals mainly because they are haunted by what happened following the Iraqi war, in which the US and UK allied against Saddam Hussein’s dictatorship back in 2003 and launched a vast range of military action, including airstrikes.

But now there is a whole different issue at stake. We are talking about Syria, a country that for five years now has been torn apart by a civil war. The conflict has caused the death of hundreds of thousands of people and the fleeing of millions, both to neighbouring countries and to European Union states.

It is undeniable that the amount of casualties is already at a staggering level, but on the other hand it would be naïve for anyone to think that if the UK just sat passively watching the incidents occurring in Syria, people’s lives would be spared.

It is not a coincidence that 59 per cent of voters back air strikes on Syria. Also Labour, the very same party which opposed the PM’s proposal to launch airstrikes against Bashar-Al-Assad, Syria’s dictator, after he used chemical weapons which caused the death of almost 2,000 civilians in 2013, had an impressive turnout of 52% in favour of launching strikes against ISIS now.

Cameron said it was morally unacceptable to leave France, the US and America’s Gulf allies- Saudi Arabia, Jordan, the United Arab Emirates, Bahrain and Qatar- to carry the burden of warfare alone. It is unacceptable primarily because ISIS is a group that has struck countries all other the world, and has the potential to strike anywhere it wishes. Indeed, after the recent terrorist attack in Paris, other cities like London, Rome and Washington are under serious threat of being targeted.

So what if we were in Paris’s position? What if hundreds of people in London had been killed while watching an opera at the Queen’s theatre, or while they were in the pub having a pint, or ice-skating in Winter Wonderland? Would you not expect the support of your allies? And would you not be disappointed if no one came to your defence?

It is not a choice. It is the UK’s duty to intervene in Syria against ISIS, as it is a member state of NATO, a military alliance created in 1949 which guarantees military backing to any of its member states if they were to ever come under attack by an external force.

So why is there even any dispute on whether our country should intervene? People should be determined to strike ISIS in Syria, especially because as grim as it may sound, we might be the next target.

However, the air strikes must be supplemented by more forces on the ground and by a proper intelligence service to avoid more civilians being killed while targeting ISIS. Cameron’s statement that there will only be 70,000 “moderate” militants sounds like a joke. First, what does the PM even mean by “moderate”? Are there even any “moderate” militants left in Syria?  Yet what is most concerning about this figure is that no one seems to be able to say  who the people in this army are from, what faction they belong to, or if they have any relation to Al-Quaeda or ISIS.

Therefore, while it is vital that the UK play a role in the fight against this massive terrorist network, more should be done to concentrate on the ground level rather than only on air attacks.

Yet scrapping air strikes all together, as some people have mentioned, is not the solution. Further, I have heard many say that peaceful tactics should be adopted before any military intervention. But the terrorist attack on the university in Nigeria which killed hundreds of young people in April, the beheadings of journalists and aid workers and the recent attacks in Lebanon and Paris which killed other hundreds of innocent people should be enough to prove that ISIS is not open to bargain and that mere talks will not solve the situation.