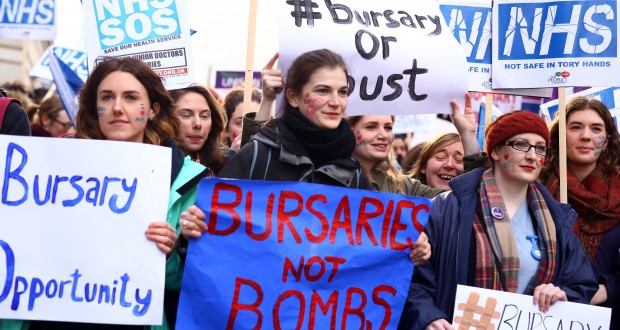 Written by Josephine Platt on January 21 2016

Health and social care students, including nurses, midwifes and paramedics have protested twice since December in Central London against their bursaries becoming loans from 2017.

Through social media and an online petition, students have rallied against the government’s proposals and have garnered widespread attention.

The hashtag #BursaryorBust has swept across twitter and a petition titled “Keep the NHS Bursary” has reached over 155,600 signatures, which prompted a parliamentary debate earlier in the month.

Students behind the petition noted their long working hours, which include up to 2,300 hours in practice of the length of their programme on top of studying full time without a summer holiday, or an Easter break, as the driving force for their protest against the new scheme.

They said: “Taking away the NHS Bursary will force more student nurses into working 70 hour weeks, as many already do, it will compromise our studies and most of all, our patient care.”

Although the changes to funding will not affect students already enrolled in the course, the decision has been viewed by students as ‘deeply unsettling’ due to the government’s promise of improvement in the sector.

Third year nursing student Berry Herrington, 21, said: “It makes me question if a long prosperous career is possible for me within the UK under the NHS if I’m subject to a government that clearly doesn’t understand how their decisions affect the health service, and make these decisions despite recommendation from health care professionals.”

How scrapping bursaries will affect the universities health departments is not known, as full details have not been released by Health Education England as to all the financial implications and support available. Karen Elcock, Head of Programmes, Pre-registration Nursing said: “It is likely we could see a small drop in applicants but we are moving into new territory. It should be noted that this change affects all healthcare students on NHS bursaries not just nursing.

“If student numbers did drop initially this could impact on the NHS in three years’ time. However the NHS is exploring new roles to support nursing which may help.”