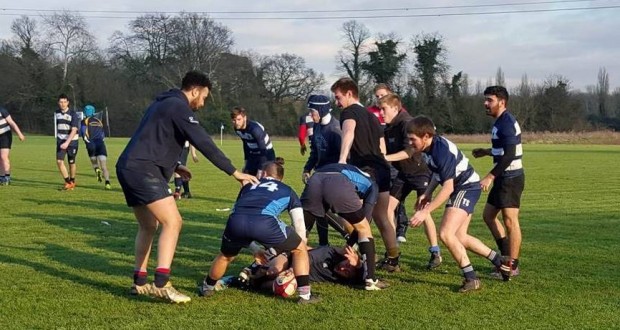 Written by Christine Younan on January 20 2016

Kingston University’s first and second men’s rugby teams were left out in the cold on Wednesday when frosty weather led to postponed matches at Tolworth Sports Ground.

“Kingston is just let down. I think that Tolworth should have let us know that we couldn’t play on the pitch before we turned up,” Kingston’s first team captain Lewis Tucker said.

The Cougars were frustrated to travel to Tolworth to find out the game was cancelled because both first and second team players have to skip seminars to make matches every Wednesday.

“It’s quite annoying that the game was cancelled, I had to miss three seminars to come to play at Tolworth,” said the first team’s Gareth Soper.

Kingston’s second team player, Henry Fletcher said: “We were all gearing up and ready to play. It is frustrating to come out to Tolworth and the game gets cancelled.”

The Cougars first team are now in power to decide when to play their rematch against Roehampton this weekend but it could have an effect on players who are unavailable to play.

Roehampton men’s first team decided to call their match off due to weather conditions which led the Kingston’s first team to believe that they were having “cold feet”.

Tucker said: “It’s unfair that the game got cancelled because they even said to us that they didn’t have a strong side up, Roehampton are trying to rearrange the game so that all their best players can make it.”

Kingston’s first and second team players continued to practice on Tolworth in preparation for their upcoming matches this season.