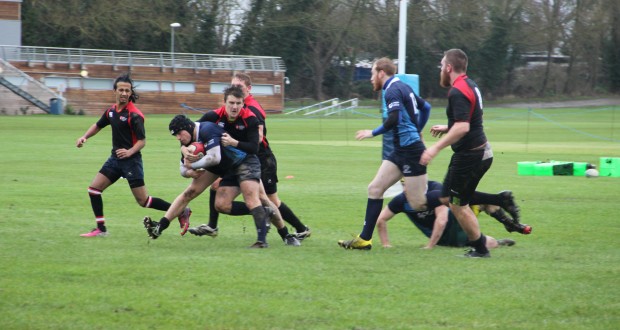 Written by Christine Younan on January 30 2016

The Cougars charged their opposition’s side throughout the match, scoring their first try of the game after the first three minutes of the first half.

Centre Ben Brown, who scored a few tries for Kingston said: “When we got that first try we were dominating the game with a few turnovers.”

Kingston slid into victory after a very rainy and muddy afternoon as they remained focused and full of stamina against their rivals.

Captain Lewis Tucker offered great support to his team throughout the whole game after their confident win against Middlesex.

“I think it’s good to get a win after last week’s game got cancelled,” said Tucker.

The Cougars had the disadvantage of having used all their substitutes due to injured players, but were still fit and able to win their game.

“We had a few injured players and players coming on and off; it makes it harder to adapt what position players are in,” said Tucker.

Kingston had more possession throughout the game, with better players than their opponents. Tucker with great speed made regular breaks, while Paddy Murphy finished off several moves.

President Noah Mackie said: “We made it harder for ourselves because they weren’t very good and we should have beaten them by more points.”

The Cougars were angered when their biggest game of the season was called off last week against Roehampton due to “icy” weather conditions.

The men’s first team kept second place in the BUCS league, with Wednesday’s victory. Their rivals Roehampton hold onto first place – a position they will challenging when the postponed game is rescheduled.

Mackie, who was taken off in the first half because of a back injury, said: “We have to beat Roehampton by 17 points to get into first place.”

Angus Oliphant-Hope, who scored the first try for Kingston, said the team had been working hard for their upcoming game against their rivals Roehampton, which arranged for a later date next week.

“Our scrums have come a long way in preparation for the big game against Roehampton,” he said.