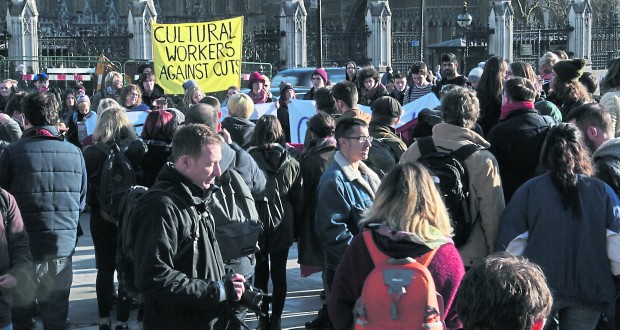 Written by Mauro Orrù on February 3 2016

The Government inflicted the second major cut of the decade on student finances. As if tripling tuition fees to £9,000 in 2010 were not enough to undermine youth trust in politics, replacing a typical annual grant of up to £3,387 – a fairly generous gift from the Government as it is free – with a £8,200 loan will hardly attract student support for a Tory re-election in 2020.

Figures from all sides of the political spectrum condemned the decision which only 18 MPs discussed as part of a private committee, avoiding a debate in the House of Commons. The behind-closed-door strategy to scrap grants suggests the Conservatives were confident their vote would not pass, had all MPs been consulted in Parliament.

The pre-election manifesto did not mention any changes to student welfare schemes but we should not be too surprised. As most of us will remember, even the former coalition government waited until the last minute before breaking its promise on tuition fees. We can only draw two conclusions from these two sneakily cunning experiences.

The first is imputable to the Government itself. Since reducing the deficit became a top priority, Prime Minister David Cameron and Chancellor of the Exchequer George Osborne have decided to raise tuition fees and convert grants into loans to collect more money and reach their deficit target as quickly as possible. Delivering the promise to cut the deficit will please older members of the public, who will probably vote for the Conservatives in 2020.

However, implementing changes that will most likely anger us students is not a threat to the government, as they know the younger generation cannot be bothered to vote. Let’s be clear. It is pathetically hard, if not impossible, to think of a period in which the Conservatives enjoyed fervent youth support.

We could also assume that Cameron’s intervention on grants is a strategic move to make money out of EU students. The Prime Minister’s appreciation for Britain to stay in a reformed EU suggests that the grants – to become loans from September 2016 – may be available to EU students, who are only entitled to a full tuition loan. Since we will all have to repay the new maintenance loans, opening the doors to EU students makes perfect sense. If, of course, student finance services come up with a strategy to track them abroad.

The second conclusion we can draw is that the government feels authorised to disregard our financial needs as consequences are unlikely. The 2010 riots, meant to force a U-turn decision on tuition fees, were not sufficient to force concessions from the authorities. It was clear that after days of protesting students lost stamina and hope.

We entered a state of latency, which the government interpreted as a consequence-free go-ahead for future changes to student welfare schemes. The defeat we suffered in 2010 fuelled disinterest among most students, who did not even show up in Parliament Square to protest against the latest changes on grants. Those who did should acknowledge that blocking traffic on Westminster Bridge for less than two hours is an embarrassingly ineffective tactic to force concessions.

We lost two battles in six years. On a cautious note, further slashes in student welfare should not be ruled out. Unless the younger generation finds the strength to pick up a pencil and vote next time, it looks like we will have to move to another country if we want to avoid paying debts until retirement.