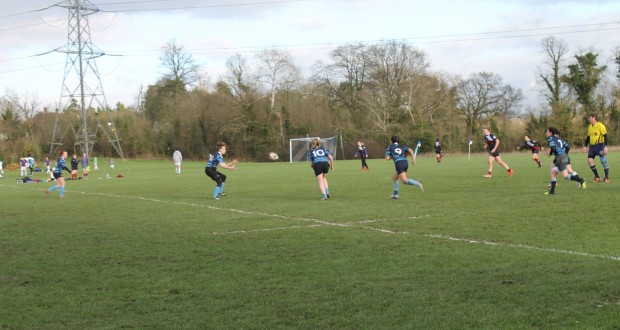 Cougars on the attack

Written by Tyrone Stewart on February 4 2016

Kingston University women’s rugby team suffered their first defeat in the South Eastern 3A by a score of 22-10 at the hands of Kent University on Wednesday at a chilly Tolworth Court.

This result follows Kingston’s 59-5 thrashing of Middlesex University away from home at Allianz Park last week but has not left the team disheartened.

The scorer of the Cougars’ first try, Sherelle Mattis, said with optimism: “I think the team has really pulled together. It is our first time in the British Universities and Colleges Sport league and we did absolutely fantastic.

“The ref called certain things that were a bit unfair and a bit challenging but we pulled through and we did our best today.

“I am so proud of the team – all the working, all the rucking and the communication was on point – just unlucky with certain things.”

Kingston took the lead midway through the first half after a very balanced, yet scrappy, opening to the game.

Mattis scrambled the ball over the line after concerted pressure from Kingston; the conversion was missed but the Cougars were up 5-0.

Mattis said: “Scoring the try felt sensational. I did not actually realise, I was like ‘I am on the ground, did I score?’”

The score remained the same into the break but the game was overshadowed by a serious injury, on the stroke of the half, to one of the Kent forwards. She collapsed on the side of the pitch after receiving a knock to the head – allegedly she was already suffering from a concussion.

After a 20-minute stoppage, Kingston resumed the game for the second half and it was just a few minutes later that Kent equalised.

The subsequent conversion was missed and the Cougars regained the lead almost instantly – 10-5 – also missing their conversion.

Those were Kingston’s last points of the game as Kent finished with 17 points unanswered.

Vicky-Linh Canada Vu, who subbed on for Mattis, said: “We tried. It was a lot of effort today. They were just a little bit better at passing down the line than we were.”

Kent’s try to tie the game 10-all did, however, cause some controversy after some questionable calls from the official regarding high tackles.

The next converted try did not provide any doubts, though, when Kent’s number 10 weaved her way through the Cougar defence to touch the ball down – 17-10.

Kent’s number 10 would seal the game a few minutes later, breaking another two tackles to score, but Mattis concluded it was not all doom and gloom for the Cougars.

She said proudly: “I was pleased with the scrums because we have some very new, inexperienced front rows but they have been smashing it and the back line was absolutely fantastic with their calls.

“They’re fantastic – the girls – we have got Roehampton next week, looking positive towards the future. It will be fine, we will be fantastic.”

Kingston host Roehampton next Wednesday – February 10 at 2pm – and are looking to bounce back against the team that they currently hold top position with.