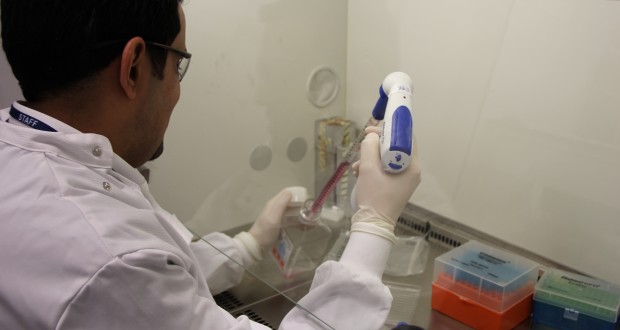 A KU PhD student received an international award for his ground breaking research to cure cataracts.

Ali Athab Al-Kinani was awarded the Graduate Student Research Award in Analysis and Pharmaceutical Quality by the American Association of Pharmaceutical Scientists (AAPS) for his research to cure or prevent the development of cataracts which could lead to blindness.

He said: “Basically, my work is based on trying to find a cure for the cloudiness of the eye, the cataract. The only available treatment now that is effective is surgery.

“The surgery takes the old lens and replaces it with a new one. However, this is readily available in developed countries; less so in developing and third world countries.”

The AAPS made 150 awards to scientists for their work, with two from the UK – Al-Kinani from Kingston and one from Manchester.

Winners are selected from the shortlists, made up of students, researchers and scientists from academy and industry.

Al-Kinani, a student at the school of life sciences, pharmacy, and chemistry, found the research enthralling from the beginning, and said that the eye is one of the most challenging organs to develop a drug for.

“For instance, when you put an eye drop in your eye, only 5 per cent of the drug reaches the target. By nature I love a challenge, so as it becomes more challenging, it is more interesting for me and more rewarding,” he said.

The research Al-Kinani is doing now is just the preliminary stage. “This is where you need to prove your hypothesis,” he said. “To form my hypothesis I tested experimental eye drops on excised eyes and on cell lines.”

In order to go to clinical trials, his work will have to go through many stages, and this thesis is the first step in a long but hopefully rewarding journey.

He is currently writing up his research for his PhD thesis. So far, he has published a book chapter and two research articles. The title awarded was ‘Antioxidant activity and real-time imaging of HPMC-coated cerium oxide nanoparticles’.

He said: “Cataracts are responsible for 51 per cent of world blindness, so it is very important research.

“I mainly focus on age related cataracts; there are some other factors that are related to the development of cataracts such as genetics, your environment and where you live. People who live next to equator are more susceptible to develop cataracts compared to others. Studies show that people who are closer to the equator by 1 degree have 3% increased chance of getting cataracts.”

He said this is why African countries, which are closer to the equator, have high rates of cataracts.

His team comprises of five supervisors: Prof Raid Alany, head of school of life sciences and chemistry, Dr Gianpiero Calabrese, who supervised his Masters, Dr Anil Vangala from the School of Pharmacy and Chemistry, Prof Declan Naughton from the School of Life Sciences, and Prof Barbara Pierscionek, the associate Dean of research and enterprise.

Al-Kinani encourages every student at Kingston to go for it, do whatever it is you want to do. “Kingston has some amazing students and highly supportive staff. They should try everything they can, they have nothing to lose. Try all the time and never stop.”